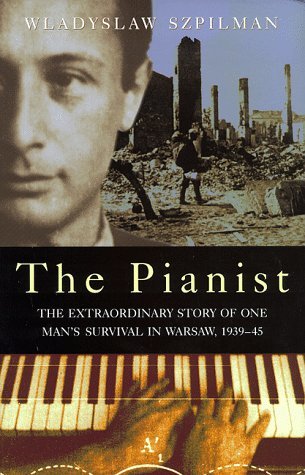 First sentence: I began my wartime career as a pianist in the Cafe Nowoczesna, which was in Nowolipki Street in the very heart of the Warsaw ghetto.

Premise/plot: In 1946, I believe, Wladyslaw Szpilman published a memoir sharing his story of how he survived the war. The book was later translated into English and began to include extracts from the diary of Captain Wilm Hosenfeld. The book did inspire a film, and, the film won lots of awards. As for the contents of the book, the life he led during the war, the near-death encounters he experienced, the physical and emotional trials--shocks--he endured, I'm near speechless. His style is matter-of-fact. It is rich in detail that would have been fresh on his mind, but, his intention was not to shock or manipulate to gain sympathy. It is very unemotional. It isn't a book of feelings or emotions. It isn't a diary he recorded day-by-day that captures the in-the-moment horrors of the war.

My thoughts: I read this one before I watched the movie. I am glad I read it first. If it had packed the emotional punch of the movie though, I'm not sure I could have endured it. It isn't that the movie portrays things differently. In fact, one of the things I noticed almost immediately was how true-to-the-book it was. It was that by visualizing it--seeing it, hearing it--changes things. For example, the violence, the destruction, the horror of it all. If you've seen the movie, chances are you know what I'm talking about. There are dramatic, traumatic scenes that words just can't do justice to. At times I watched the movie almost in shock that humans could treat each other like this, that so much hatred could exist, that the world could be unjust. But then I'd switch from the movie to the news, and, it was all reaffirmed.

The movie is not devoid of hope, nor should it be. If its about humanity--it shows us at our best and at our worst. There is good to be found as well as evil. There are kind, generous, loving people as well as monsters.