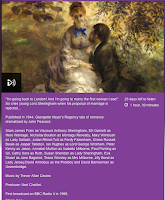 I have discovered the joys of listening to BBC radio dramas. This is what I listened to this week:

I have read this one at least twice, but it was such a JOY to listen to it dramatized. Now is Friday's Child my absolute favorite Heyer romance? Not really. But I do enjoy it--especially all the minor characters that seem to steal the show.

Here's what it's about: When we first meet Lord Sherington* he is proposing to Miss Isabella Milborne. He marries a few chapters later, but, his wife is NOT Miss Milborne. After a brutal rejection, he decides to marry the first woman he sees. He happens across an old friend from childhood days, a Miss Hero Wantage. She is much younger than he is--just seventeen! But she's willing, more than willing, to be his wife. How did these two happen to meet? Well, she's running away from home! So Sherry and Hero set off together to London to arrange their marriage. He settles her into a hotel room, and, then begins to go about the necessary details of arranging a super-quick wedding!

Sherry wanted to marry so he could inherit now instead of later. At first he thinks his marriage won't really change anything at all in his daily life. But, of course, he was mistaken! Hero is completely clueless about how a proper young wife should behave, what things are socially acceptable and socially encouraged, and what things are NOT to be done. Hero absorbs everything, she's very observant but not exactly discerning. She's impulsive too! So if she wants to try something, she does!

Hero's closest friends are her husband's closest friends: Gil, Ferdy, and George. And they all adore "Kitten." In fact, sometimes they understand her better than her own husband. They are quicker to perceive things! They can "read" her better and sometimes they interfere in the marriage to help things run smoother. They often explain things to Sherry in such a way that he finally gets it. Sherry, however, feels that they interfere too much!

While Hero is aware of her feelings for Sherry, will her husband ever realize how he truly feels about his young wife?!


It is available to listen to online for a few more weeks.

I also listened to How To Stop Time by Matt Haig. This drama was split into two episodes. I have NOT read the book. But it's in my tbr pile! Typically my rule is never listen to an audio book unless I've already read it. But I couldn't resist, this one sounded so interesting, so full of potential. I'll let you know what I think if/when I get to the book.

Publisher Description: Tom Hazard has a dangerous secret. He may look like an ordinary 41-year-old, but owing to a rare condition, he's been alive for centuries. Tom has lived history--performing with Shakespeare, exploring the high seas with Captain Cook, and sharing cocktails with Fitzgerald. Now, he just wants an ordinary life.

So Tom moves back to London, his old home, to become a high school history teacher--the perfect job for someone who has witnessed the city's history first hand. Better yet, a captivating French teacher at his school seems fascinated by him. But the Albatross Society, the secretive group which protects people like Tom, has one rule: never fall in love. As painful memories of his past and the erratic behavior of the Society's watchful leader threaten to derail his new life and romance, the one thing he can't have just happens to be the one thing that might save him. Tom will have to decide once and for all whether to remain stuck in the past, or finally begin living in the present.

How to Stop Time is a bighearted, wildly original novel about losing and finding yourself, the inevitability of change, and how with enough time to learn, we just might find happiness.

The novel Show Boat is in my TBR pile. In fact, it is one of my selections for the 2018 Official TBR Pile challenge.

I have not read the novel. But I have seen the non-musical film AND the musical film. I was curious to see if the radio drama would be like or unlike the film in terms of story and characters. Definitely some differences! I am more anxious than ever to read it now.

I thought the drama was very compelling. There are still a few more weeks left to listen to this one if you're interested.