The Story of Live Dolls 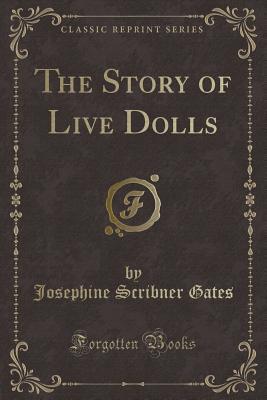 First sentence:  "Look, what's coming!" and with a shout of delight the children of Cloverdale village left their play and rushed into the street.

Premise/plot: Janie is super-excited one June day when she witnesses a spectacular site. The Queen of Dolls rides through town in a carriage pulled by kittens. She's tossing bills as she goes, bills that proclaim that on June 4th--the very next day--ALL the dolls in the town will come alive, and stay alive, for the whole month of June.

Janie rushes to tell her mother. (As I'm sure all the other little girls do). She spends the rest of the day preparing for the big day. But she's not as considerate as she might have been. Poor Dinah! Still, she makes an effort to be a good steward. 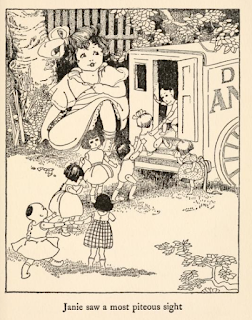 Most of the book is about that magical month of June. It isn't all fun and games. There are a few lessons not so subtly tucked away into the text. For example, the Queen of Dolls finds it necessary to have a doll ambulance visit each girls' home to carry off dolls that need a trip to the doll hospital. It's sadly too late for one doll in particular. A doll that was drowned by her owner.

The book reflects an honest enough look at how dolls are treated. Early on in the novel, it's revealed that some of Janie's dolls are--dare I say it, STARK NAKED. She's not the only doll owner about to be judged and found wanting. Still, better to be a naked doll than to have a cracked head, a missing limb, or be DEAD.


"O you dear little mamma, I am so glad you are awake. I want to come into your bed," and up she popped and climbed in under the covers and snuggled up exactly as Janie often snuggled up to her mamma. (14)

Here's the disturbing scene where a doll is declared dead:


One poor little thing lay apart from the others and was dripping wet. Her companions sobbed aloud as they told in low tones of how she was fished out of a water barrel, stone dead. Not even the Queen could bring her to life. (39)

And the agenda comes straight to the point:


She told them how kind they ought always to be to their dolls--just as kind as they wished their mammas to be to them....Her eyes filled with tears as she spoke of the poor little dead one; and she said she could always tell what kind of heart a little girl had by the way she treated her doll. Those who made the sweetest and tenderest mammas were those who had taken the most loving care of their dollies when they were little girls. She wanted them to begin over, and see who could be the best mother during the few weeks that followed. (52-3)

My thoughts: I definitely enjoyed discovering this one. Would I have loved to have my dolls come to life as a child? Probably. Would I have been judged harshly by the Queen of Dolls? It would depend on the doll. There were a few dolls that were a bit out of favor, you might say. I didn't play with them--nor care if they were ever dressed. My mom could tell a few stories on me. BUT thankfully, she's not online.

The story is dated. Dinah is one of the dolls, she's a black cook with a wig askew (though she has a kerchief) and a broken leg that was hastily put on BACKWARDS. That's why I said poor Dinah. I suppose in 1901, when the story was first published, having a black cook in a household was nothing out of the ordinary.