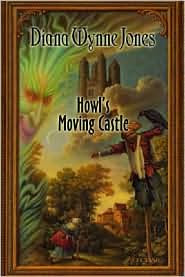 My new-found love for Diana Wynne Jones became evident only a few pages into Howl's Moving Castle, a wonderful fantasy novel revolving around a moving castle and its inhabitants.

In the land of Ingary, where such things as seven-league boots and cloaks of invisibility really exist, it is quite a misfortune to be born the eldest of three. Everyone knows you are the one who will fail first, and worst, if the three of you set out to seek your fortunes.

Sophie Hatter was the eldest of three sisters. She was not even the child of a poor woodcutter, which might have given her some chance of success. Her parents were well-to-do and kept a ladies' hat shop in the prosperous town of Market Chipping. True, her own mother died when Sophie was too years old and her sister Lettie was one year old, and their father married his youngest shop assistant, a pretty blonde girl called Fanny. Fanny shortly gave birth to the third sister, Martha. This ought to have made Sophie and Lettie into Ugly Sisters, but in fact all three girls grew up very pretty indeed, though Lettie was the one everyone said was most beautiful. Fanny treated all three girls with the same kindness and did not favor Martha in the least.

After the death of Mr. Hatter, the three Hatter sisters are divided up out of necessity--due to debt. One becomes apprentice to a baker/pastry chef. One becomes apprentice to a witch, Mrs. Fairfax. And Sophie, the oldest of the bunch, remains as "apprentice" to Fanny and continues working in the hat shop. Sophie in her people-pleasing, peace-maker role would have been content merely to let life pass her by. If only. If only...she hadn't fallen under the curse of the Witch of the Waste. Cursed to be old (long before her time), Sophie flees the shop (and her village) in shame and frustration. Forced to have an adventure, forced to "seek her fortune" despite being the oldest child, she stumbles across Howl's castle and seeks refuge.

Sophie meets Michael, Howl's apprentice, and Calcifer, Howl's fire demon who resides in the hearth of his castle. Sophie makes an impulsive deal: she'll try to break the contract between the two of them (Howl and Calcifer) if Calcifer will promise to break the curse over her. Sophie's meeting with Howl isn't immediate. And her impressions of him are ever-changing as time goes on.

Who is Wizard Howl? Well, in a way, he is who he chooses to be at that moment. A man of many names certainly. A man who likes having a bad reputation. A man who seems more playful at times than dangerous. A man trying to escape his own curse. Putting aside everything she's heard about him, Sophie begins to like this strange man. She is there to clean and mend for him. And he likes sending Sophie out in the role of his mother.

There are many twists and turns (some expected, some quite unexpected for this reader at least) that unfold throughout the novel. I don't want to go into every little detail and name every character that graces the pages of the book. But I will say this, I really enjoyed this one. It was a book that was fun and playful and delightful. A book that doesn't take itself too seriously.

Yes! Another DWJ fan is born :D I LOVED the playful tone too. It won me over from page one.

Have you seen/do you plan to see the Miyazaki movie? It's quite a bit different, but also very good!

I watched the cartoon and fell in love with it. (L)

Fantastic! I have this book checked out from the library, and now I can't wait to get started!

I've yet to read anything by her, though I've been meaning to for ages. Nymeth loves her so much, I just know she must be something special. And Annie really loved this book as well. So what the heck am I waiting for, huh?!!

I'm glad you liked it so much! It's a favorite of mine.

I just decided a moment ago that I need to get this from the library! It turns out the book I have by her right now is a sequel...

Oh I adored this book when I read it last year. Dying to read the sequels, but for the life of me, I can't find Castle of Air.

The Studio Ghibli film of it was lovely.

Miyazaki's Howl's Moving Castle is a fantastic piece of animation, and I certainly loved that. The excerpt here has me intrigued as well, and looks lovely -- a nice bit of literature for young adults and adults alike.

I didn't like this one as much as I thought I would when I read it, but I thought you did a great job with the review. You really captured a lot of the book in your summary.

i didn't know the movie was based on a book. i loved the movie so much and now your review makes me want to go get the book.