Kiss of Life (YA) 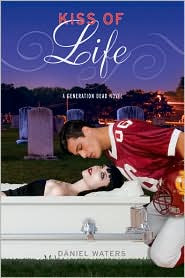 Phoebe Kendall's closest friends are zombies differently biotic. Phoebe Kendall's love interests are zombies differently biotic as well. This includes Adam, the best friend that she didn't really see in that way until he died saving her life at the close of the first book, and Tommy, the boyfriend she never got to kiss because Adam's death dampened the party atmosphere.

When Kiss of Life opens, Phoebe is ignoring Tommy completely and doting on Adam. How is Adam adjusting to life as a zombie? Well, he's having a rough time of it. He is just not as "alive" as the rest of the zombies. At least not yet. Phoebe is hoping that she can change that. She's hoping that if she loves him enough, he'll get better. But is she doing this out of love or guilt or pity? Does she love Adam in that way? Or does she still love Tommy?

Like Generation Dead, Kiss of Life is a novel about how people are treated. In the first book, much time was spent on making sure the reader understood that zombies are people too. That they deserve to be treated with respect and dignity. That they are not monsters to be feared. Which is why it is so important to never offend a zombie by using the word "zombie". They are differently biotic as opposed to traditionally biotic. But Phoebe also has learned that among themselves, many do like the word zombies. It's just the "beating hearts" who can't get away with the z word.

So there is much drama in Kiss of Life. Sadly, I felt disconnected from that drama. In places I found it lacking in compelling drama. I just didn't care about Phoebe's love triangle. Or the broken fragments of what once was a love triangle. There is some tension between Phoebe and the other zombies she hangs out with. Especially with Karen. So that was nice. And then there was the revealing of the bad guys...so there was some drama.

© Becky Laney of Becky's Book Reviews
Posted by Becky at 8:38 AM