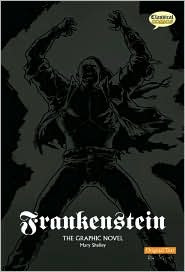 From the letters of Robert Walton:

My dear sister...
I am already far north of London; I feel a cold northern breeze play upon my cheeks, which braces my nerves and fills me with delight.

I love Frankenstein. I do. I consider it one of my favorite books. It is one that I love to reread whenever I get the chance. So I was happy to read this graphic novel adaptation of the original text. I was curious to see if I'd enjoy it. I'm not a big fan of graphic novels. But. Since I love Frankenstein so much, I wanted to give it a chance. I'm glad I did. I thought they did a great job in telling the story of Victor Frankenstein's monstrous creation.

For those that may be unfamiliar with the book, it is the story of a young man, Victor Frankenstein, whose obsession leads him to the dark side. He becomes consumed with trying to resurrect the dead. He pieces together a creature, a being. He is not beautiful to look upon--even before he's brought to life--and he's quite taller than your average human. He was built to intimidate, in a way, though Frankenstein seems in denial about this until it is much too late! (I've always been curious as to HOW Frankenstein could be surprised by the creature's appearance. How tall, how strong, how ugly. Was he not in his lab every single day and night with the creature? Did he not build him piece by piece by piece? If the creature is ugly, it's because Frankenstein made him that way.) When the time comes, when the creature is brought to life, Victor Frankenstein panics and abandons his creation. His madness gave birth to an unnatural being, and Victor does NOT want to be credited as his creator. Yet. Denial and neglect does not negate the fact that Victor IS responsible. Victor Frankenstein tried to play god--and the result is a demon, a devil.

Readers get this story from Victor and from his creation. Readers hear the creature's sad story. Of his confusion, of his frustration, of his pains and miseries, of his rejection. The creature, at first, is trying to survive and learn. He does have hopeful moments in the beginning. He finds a family to watch. He learns about humans, about family, about reading and writing. He gets a glimpse of "the good life." But he soon learns that this "good life" will never be his. Because before he can even utter a word, men, women, and children shriek in terror. Every person he encounters fears him. Every person responds in violence. Soon, this creature begins to treat others as they treat him. If they expect violence, he'll give them violence. He wanted compassion, but it seems even from his creator--the only man who has a duty, perhaps, to love--that that is an impossible dream. The creature tries to reason with his creator, then he tries threats. And, yes, he does incredibly violent things. In revenge. In anger. There is no excuse for this violence.

(There is another edition available from Classical Comics which abridges and updates the text.)


© Becky Laney of Becky's Book Reviews
Posted by Becky at 8:29 AM

Great review, I love classic comics. Declan Shalvey is getting better and better.

Not sure if I would read this or not... I haven't actually read the original story yet, so should likely start there!

I've read this book (original) when I was in grade school (I'm now 22) and I really enjoyed every part of Frankenstein. Frankenstein will forever be a part of our history. It's really a must read.