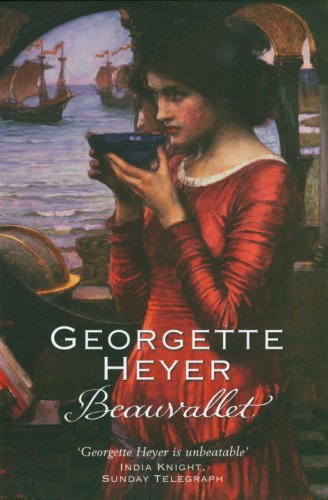 The deck was in shambles.

Dona Dominica, the daughter of the former governor of Santiago, Don Manuel de Rada y Sylva, is on her way back to Spain--along with her dying father, when their ship the Santa Maria is boarded by English adventurers (pirates) led by the fearless El Beauvallet (Nicholas Beauvallet). The two are taken captive by Beauvallet and brought aboard his ship, Venture. But he promises--and it's not a promise without risk--to return these two safely to Spain. If anyone can land an English ship safely into a Spanish port during these hostile times it would have to be Beauvallet.

At first Dominica hates her captor. She refuses to admit to herself that he is a little charming, a little handsome. She flirts with the other men to drive him crazy. But. Soon she has to admit that there is an attraction between them. And she's shocked to hear him boast recklessly of his honorable intentions to make her an English woman before the year is out. Since she is his captive, you might think this would be easy. Just set sail for England instead of Spain. The lady seems willing enough. But Beauvallet wants the challenge. So he keeps his promise--his first promise--both father and daughter arrive safely in Spain. Beauvallet returns to England, to his family, to his Queen.

But Dominica has not been forgotten. And a few months later, Beauvallet is ready to pursue his lady. To woo her in Spain. With England and Spain so very, very close to war--how can an Englishman, a pirate, a dreaded pirate, safely enter Spain? He has boasted that he will find a way...

Meanwhile, Dominica's father dies and she is taken into her aunt's family. Her aunt!!! Oh what a character Dona Beatrice is! She's a strong, strong woman with a mind of her own. She has a way of bullying all the men in her life including her son, Don Diego. She has determined that he must marry Dominica.

Beauvallet is an exciting and dramatic historical romance set in the Elizabethan era. Beauvallet is a bold adventurer who will risk it all to win his lady love. With his faithful companion, Joshua Dimmock, by his side, Beauvallet is ready for any challenge. The book had action, adventure, drama, and romance. I enjoyed Beauvallet very much!

The opening chapters of Beauvallet definitely reminded me of The Sea Hawk, a 1940 film starring Errol Flynn.

© Becky Laney of Becky's Book Reviews
Posted by Becky at 10:04 AM

It's a Heyer, so enough said. But it was never in my top ten or even top fifteen. I would probably pop it down with Pistols for Two, A Civil Contract and My Lord John.

Sounds like a great book! Thanks for the review!