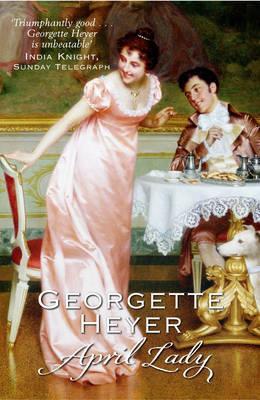 There was silence in the book-room, not the silence of intimacy but a silence fraught with tension.

April Lady is an enjoyable albeit predictable read. Our hero, Cardross, and our heroine, Nell, have been married over a year when the novel opens.

The book begins with an argument over money. The wife is being scolded by her husband for going over her quarterly allowance. It’s not that he’s not fabulously wealthy. He is. He just wants his wife to be able to account for the money he’s given her, for the unpaid bills that arrive at the house.

Nell is keeping other secrets from her husband. She is lying about giving money to her brother, Dysart, to cover his gambling debts. She knows she is disobeying her husband by “supporting” her brother like this. But she can’t understand why her husband blames Dysart for being an addict. He should know that Dysart just can’t control himself when it comes to gambling and racing. Being unsure of her husband’s love (and respect), Nell spends much of her time afraid of her husband. She’s afraid to be honest with him, which is all that he is asking of her.

Both husband and wife are deceived. She is certain that he doesn’t love her, that their marriage is one of convenience not love. And he is certain that she doesn’t love him, that she married him for his money. (Her family is always in need of money since her father and brother are gambling addicts.) The reader is the only one who knows the truth: these two do love each other, and have loved each other from the beginning.

Is Nell as silly as she seems? Is Cardross as tyrannical and unforgiving? Will these two ever be completely honest with one another?

While I didn't love the plot of this one--at least as much as other Heyer novels I've read in the past--I did enjoy the characters. Particularly the "minor" characters. Nell has a sister-in-law, Letty, whose troubled love life steals the show, in a way. She's in love with a man, Jeremy Allandale, deemed "unsuitable" by her older brother. (Letty gets one of her many scoldings in the second chapter.) This love affair is "aided" by Letty's cousin, Selina Thorne, a young lady who has read too many novels. This romance provides my favorite scene of the novel!

Dysart, Nell's brother, and Mr. Hethersett, Cardross' cousin who has a way of being in the right place at the right time to aid Nell out of her messes, also add to the novel's charm.

One of the weaknesses of this novel, however, is Cardross. It's hard for the reader to fall in love with Cardross when he's only in a handful of scenes. (He spends most of the novel out of town on a trip.) Especially when most of those scenes show him scolding the women in his life. Are Letty and Nell silly? Yes. But still, that doesn't mean it's fun to read Cardross' condescending scoldings. (Or Dysart's scoldings for that matter!)

Also, I felt the romance between Cardross and Nell to be a little lacking. We're told that it was love at first sight. Yet we rarely see these two in the same room. And when they are in the same room, he's either scolding her or she's awkwardly avoiding him in conversation. These two are uncomfortable in their scenes together. Neither wants to be vulnerable. Neither wants to show too much.

© Becky Laney of Becky's Book Reviews
Posted by Becky at 8:17 AM

It's not one of my favourites either. I spent time wanting to slap Nell for being so silly.

I am currently reading my first Heyer, I chose "Those Old Shades" and I am impressed by how much I am enjoying it considering it was published in 1926, what would you recommend next?

The Book Chook, I agree! I had a hard time with Nell. She seemed so childish, so immature, so not ready to be married.

Emily, I would probably recommend Devil's Cub next. That one is very enjoyable--and you'll see some of the characters from These Old Shades.

Emily, I agree with Becky. Do try Devil's Cub. If you can't find it, another one with a delightfully strong heroine and wonderful cast of characters is Frederica.

I love Georgette Heyer, but I feel like every once in awhile I get one that's a let down. I most recently read The Unknown Ajax and did not love it.

I preferred Devil's Cub to These Old Shades.

I agree that Frederica is great, as is The Grand Sophy

The Book Chook, I agree that Frederica is a great book. I really loved that one.

Mrs. N. I haven't read The Unknown Ajax yet. But I agree that every once in a while Heyer disappoints. Not in a what-an-awful-awful book way. But this-isn't-as-good-as-such-and-such...way. Heyer--to me--like Sarah Dessen is an author whose "worst" books are still often better than others.

Becky - so funny you should mention Sarah Dessen, I was just having a conversation with people who think she's overrated! On the other hand, I have totally been trying to space out reading her books! I don't love them all equally, but even a bad one by her standards generally succeeds in keeping me involved and interested.