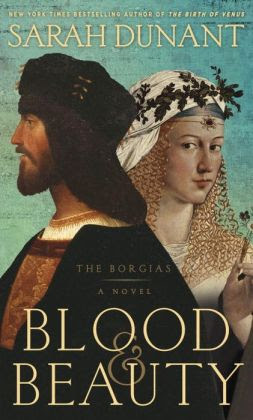 I loved, loved, loved Sarah Dunant's Blood & Beauty. It is a novel of the Borgia family. Readers get an 'inside' glimpse into the lives of Alexander (Pope Alexander VI, Rodrigo Borgia), Cesare (Cardinal Valencia, Duke Valentinois), Juan (Giovanni, Duke of Gandia), Lucrezia, and Jofre. The best thing about this novel? Every single character--every major character, every minor character--has substance and depth. There is a richness, a complexity that was lacking in another Borgia novel I read earlier this year. The characters are all too human. Yes, characters are flawed, but dynamically so.

The novel opens with Rodrigo Borgia hopeful that he can indeed bribe the cardinals into making him the next pope. Victory is his within the first few chapters, and then the dynasty-making truly begins. The family dynamics is interesting, very complex. He loves all his children, but, some he loves more than others, and some he trusts more than others. I loved getting stories on ALL of his children. Juan has an army; he can be reckless and impulsive; he also LOVES women. Wherever he goes, he ends up being talked about. The same can almost be said about Cesare, except, he's presented as being more in control, more calculating, more intellectual. He's a strategist, capable of seeing the big picture, seeing possible outcomes, calculating risks, making bold moves when needed. He has his share of women too. And he's presented as being very charismatic. Lucrezia's portrayal is interesting. This was the first time I really saw her as being so young. Her father and brother manage her relationships to a certain degree. They arrange her first marriage. They arrange when her husband can come visit her, stay with her; they are the ones to decide if she's to stay in Rome or go to live with her husband. They are the ones to analyze the 'success' of the marriage and decree it not worth keeping. They encourage strongly the need for an annulment. And that's marriage number one... Lucrezia is depicted as being clever and observant, as being bold enough to give advice and ask questions of her father and brother; she's seen as young, religious, compassionate. She is not portrayed as a sexually immoral woman. However, her sister-in-law, Sancia, is, the novel mentioning her relationships with all three Borgia brothers. Joffre, the youngest, is depicted as being immature and not as bright as his two older brothers. He idolizes his brothers, envies their strength and popularity. But he is presented as not being smart enough or charismatic enough to be politically useful.

I loved the depth to the characters. The book was fascinating and entertaining. I appreciated the author including a bibliography that showed her research into the time period, into the family. This is very much a novel about power--political and military power--and ambition.

I loved this book to Becky! Thanks for the link to the family song it was pretty funny,lol.
Amy The Crafty Book Nerd

Becky, have you read Prince of Foxes by Samuel Shellabarger? It's one of my favorite "romances" set in this time period, with Cesare Borgia as a minor character.