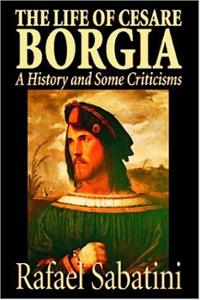 The Life of Cesare Borgia: A History and Some Criticisms. Rafael Sabatini. 1912. 326 pages. [Source: Bought]

Rafael Sabatini would NOT have approved of Horrible Histories' Borgia Family. The truth is, however, that I would never have sought out Sabatini's biography of Cesare Borgia if I'd not fallen in love with the video. It was Mat's "I am the mostest, powerfulest, evilest of all" that made me curious and seeking. I wasn't that impressed by my first attempt to learn more. The fictional Borgia Bride was awful. Fortunately, I discovered Sabatini's biography. It was LOVE.  It wasn't love because it fit into any preconceived notions about how I wanted the Borgia family to be. It was love because it respected human nature and historical fact. It embraced common sense and used dry wit, in part, to argue and persuade.

I journaled my reading in four parts. The first post tackled the preface and introduced Sabatini's goal in writing. It was WONDERFUL. The second post examined Cesare's father, Alexander VI (Rodrigo). The third post focused almost exclusively on Cesare. The fourth post focused on Sabatini as an author, his narrative style, his technique of criticizing other authors and sources.


Life is an ephemeral business, and we waste too much of it in judging where it would beseem us better to accept, that we ourselves may come to be accepted by such future ages as may pursue the study of us.
But if it be wrong to judge a past epoch collectively by the standards of our own time, how much more is it not wrong to single out individuals for judgement by those same standards, after detaching them for the purpose from the environment in which they had their being? How false must be the conception of them thus obtained! We view the individuals so selected through a microscope of modern focus. They appear monstrous and abnormal, and we straight-way assume them to be monsters and abnormalities, never considering that the fault is in the adjustment of the instrument through which we inspect them, and that until that is corrected others of that same past age, if similarly viewed, must appear similarly distorted.
Hence it follows that some study of an age must ever prelude and accompany the study of its individuals, if comprehension is to wait upon our labours.

Sabatini just came across to me as practical, witty, sometimes wise, and sometimes poetic.


Mind being the seat of the soul, and literature being the expression of the mind, literature, it follows, is the soul of an age, the surviving and immortal part of it; (6)

Anyway, here is Sabatini's thesis--his goal for writing this biography. If you can embrace this premise, then chances are you'll find this one well worth the read!!!


Before we admit facts, not only should we call for evidence and analyse it when it is forthcoming, but the very sources of such evidence should be examined, that, as far as possible, we may ascertain what degree of credit they deserve. In the study of the history of the Borgias, we repeat, there has been too much acceptance without question, too much taking for granted of matters whose incredibility frequently touches and occasionally oversteps the confines of the impossible. (12)
If the author has a mercy to crave of his critics, it is that they will not impute it to him that he has set out with the express aim of "whitewashing"—as the term goes—the family of Borgia. To whitewash is to overlay, to mask the original fabric under a superadded surface. Too much superadding has there been here already. By your leave, all shall be stripped away. The grime shall be removed and the foulness of inference, of surmise, of deliberate and cold-blooded malice, with which centuries of scribblers, idle, fantastic, sensational, or venal, have coated the substance of known facts.
But the grime shall be preserved and analysed side by side with the actual substance, that you may judge if out of zeal to remove the former any of the latter shall have been included in the scraping. (13)

If Sabatini was alive to refute current fictional portrayals of Cesare in romance novels...


Women play no part whatever in his history. Not once shall you find a woman's influence swaying him; not once shall you see him permitting dalliance to retard his advancement or jeopardize his chances. With him, as with egotists of his type, governed by cold will and cold intellect, the sentimental side of the relation of the sexes has no place. With him one woman was as another woman; as he craved women, so he took women, but with an almost contemptuous undiscrimination.

The biography is rich in detail. It doesn't just focus on Cesare. It tries to cover more than that--to look at an age, to capture a time and place. It is ALL ABOUT context for Rafael Sabatini. And I really enjoyed his technique overall.