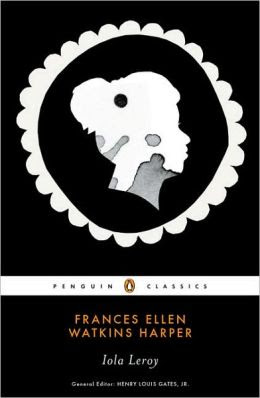 I've been meaning to read Iola Leroy for several years now. Iola Leroy is one of the first novels written by an African American woman. The novel isn't arranged chronologically. It starts during the Civil War. Readers meet a handful of slaves who are deciding whether or not to leave their plantations and join the Union army or to stay on their plantations and continue to serve. A chapter or two keeps us with the army, following a few soldiers. The character of Iola Leroy is then introduced. She's a young woman who could easily pass as a white woman--if she wanted; one doctor with the army, a Dr. Gresham falls madly in love with Iola Leroy. He knows "the truth" about her ethnicity, her background, and it doesn't make the slightest bit of difference to him. She is THE ONE for him; he knows it. But can he convince her that his love is the real thing?

After briefly meeting Iola Leroy and Dr. Gresham and a handful of others, the novel then takes us back several decades in time. Readers meet Iola's mother, Marie (a slave), and her father, Eugene (a slave-owner). This portion of the novel feels forced, scripted, a bit unnatural. It begins with a conversation between Eugene Leroy and Alfred Lorraine. He is telling Lorraine of his intentions to free Marie, marry her, and bring her back to the plantation as his wife, his hopes to raise his family in the south.

Eugene does exactly as he plans. Marie is freed; the two are married; they have three children. But his plans are set aside after his death. Alfred Lorraine, his closest white relative, insists that Marie is a slave, and that her three children are slaves too. He gets his way. Iola is tricked into coming home, but her brother is safe at school in the North. (The youngest child dies.)

Most of the novel focuses on life AFTER the war is over, AFTER the slaves are freed, during the messy period of Reconstruction. Iola Leroy and her uncle (whom she just happens to meet) are searching desperately for their families. There are plenty of happy reunion moments in between the social commentary. There's also a romance squeezed in for Iola Leroy. (It is NOT Dr. Gresham.)

The narrative falls into two types: dialect and lecture. I found the dialect to be more interesting and more enjoyable. The narrative style in the 'lecture' sections reminded me of A Pilgrim's Progress.
© 2013 Becky Laney of Becky's Book Reviews
Posted by Becky at 8:30 AM