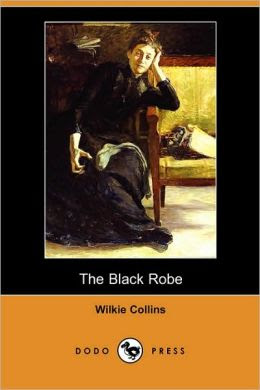 The Black Robe is slightly similar to Anthony Trollope's He Knew He Was Right (1869) and Kept in the Dark (1882). All three books deal with the hazards and drama of marriage.

Lewis Romayne travels to France with his friend Major Hynd. While in France, Lewis goes gaming. At a card game, he accuses a man of cheating. The man insists on a duel. For whatever reason, the man is unable but his (grown) son insists on taking his place. This son is rumored to be quite good at shooting. Lewis, for better or worse, fires a "lucky" shot. His opponent dies. Now there is unbeknownst to all, a younger brother on the scene who witnesses his older brothers death. He screams out. These screams haunt Lewis. A good percentage of the novel focuses on how haunted and disturbed Lewis is psychologically. His friends fear the worse, they fear he will become insane. One of his friends thinks that marriage is the answer. If Lewis would only find a wife, surely, he will become suddenly sane. Right?! It makes perfect sense. If Lewis is unstable and unbalanced, of course, he needs a wife. And his friends have just the woman in mind. Fortunately, she fell in love with him at first sight. She's drawn to him precisely because he looks so fragile and vulnerable. Not everyone thinks marriage is the answer, however.

Father Benwell is a Jesuit priest with an agenda. (Well, why wouldn't he have an agenda?!) Romayne has inherited property that centuries before (think Henry VIII) had belonged to the Catholic church. Benwell is determined to have that property (Vange Abbey) back. He has a main plan and several back-up plans just in case his original schemes fail. One of his plans involve another Jesuit priest, Arthur Penrose, Penrose is one of the nicest characters in the book. Penrose has been instructed to convert Lewis, to do whatever it takes to turn him Catholic. Penrose's approach doesn't suit Benwell. But his gentleness and sincerity make a lifelong friend out of Lewis.

Lewis marries Stella Eyrecourt. Benwell needs a good plan B. He decides to see if he can dig up a scandal concerning the wife. If he can separate the couple, surely, he will be weakened and even more vulnerable. He would be eager to turn from his wife to the church. He might love the church so much he voluntarily gives Vange Abbey back! But can Benwell find anything scandalous in Stella's past?!

My favorite character was definitely Bernard Winterfield. The last half of the novel is told through his diary entries.

If you have enjoyed Wilkie Collins in the past, chances are you'll enjoy this novel too. While I didn't love it as much as Armadale or Woman in White, I did find it compelling! There are plenty of secrets!


Art has its trials as well as its triumphs. It is powerless to assert itself against the sordid interests of everyday life. The greatest book ever written, the finest picture ever painted, appeals in vain to minds preoccupied by selfish and secret cares.

Whether we only express our opinions of pictures or books in the course of conversation or whether we assert them at full length, with all the authority of print, we are really speaking in either case, of what personally pleases or repels us.

One I haven't read! Been a little put off of his later fiction because I know it won't live up to the earlier stuff but, as someone studying the guy, I should probably pull my finger out!

hooray for Wilkie! I should have known you'd read Wilkie for RIP!

I am currently reading Drood, too!

I have got to find time to read more Wilkie Collins. I really enjoyed Woman in White and The Moonstone, and this sounds intriguing as well.

I've only read Woman in White and I liked it very much. This sounds like fun. I think I need to read more Wilkie Collins!

Thank you for this! I haven't heard of this novel and I love Wilkie Collins - which I admit is just plain laziness on my part for not really checking into his other books.
I will definitely try and find a copy of this.
Lynn :D