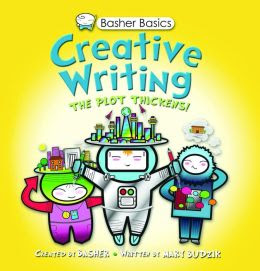 Creative Writing is a book in the Basher Basics series published by Kingfisher. (Other titles in the series include: Grammar, Punctuation, Music, Weather, Math, etc. There are two other lines as well: "Basher History" and "Basher Science".) This one would be perfect for middle grade (upper elementary school and/or junior high).

In the first chapter entitled "What's The Story?" readers learn about genres. Seven genres are included in chapter one: adventure, horror, science fiction, fantasy, mystery, diary, and poetry. Each genre has its own two-page spread. Mystery is found on page sixteen.

I'm a cagey type whose world is seldom as it seems. Wary Protagonist might look for the story behind the story but, dogged by dastardly deeds, seems instead to stumble into muddles, mayhem, and even murder.
I scatter clues for detectives, private investigators, and interfering old ladies. I lead Protagonist into some sticky situations and courageous capers, but good old Pro is always equal to the challenge, refusing to back off despite ominous omens, threats from thieves, or pleas from the police. It is a question of having to be supremely self-confident, of trusting that gumption and grit will save the day. Even then, with criminals corralled and cooped up for good, it won't be long before I set yet another trail of trouble.  This game of wits is just too much fun to play.

The second chapter is entitled "Scene Setters." This chapter explores the concept or significance of title, theme, setting, and atmosphere. Theme is found on page twenty-six.

I'm a thoughtful type and sometimes a bit shy. Sure, Plot likes to scurry here and there, Plot Device teases readers with its tricks and colorful Figurative Language draws all eyes. Meanwhile, I meditate peacefully at the very center of a story, waiting patiently for you to find me. I often speak through other elements of a story rather than in a voice of my own, which means I can be a little hard to spot. I am worth seeking out, though. If you pay close attention and, like me, practice quiet reflection, you will hear my message, I'm sure--I'm intuitive! Ask yourself: Are there subjects in the story that reappear in different ways in different episodes? What makes Protagonist especially happy or sad? Does the story's title offer any clues? Before you know it, you'll have found me!

Try these:
*Identify the different themes in your favorite novel
*Choose a simple theme (for example, "friends are found in unexpected places") then work on a story to illustrate the theme.

Chapter three is entitled "Schemers and Dreamers." It introduces these concepts: plot, structure, flashback and flashforward, plot device, and denouement. Structure is found on page thirty-six.


Structure
*The arrangement of the events within a plot
*Gives a story a beginning, a middle, and an end
*Getting the order of events just so increases a story's impact

I am Plot's conscience. Addicted to the roller-coaster ride of events, Plot has a tendency to overwhelm a story like a tsunami, scattering mishap and misfortune all around. Well, it's my job to make Plot stop and think. I show that hothead some restraint! Yes, with me on board, plot chooses balance over bedlam and cause over coincidence. You see, I have a set of tools that help organize events in a logical progression, each incident causing the next. Thus Plot is able to set the scene (exposition), get things moving (rising action), stir things up (conflict), put on the brakes (suspense), cue the thunder (climax), and let everything settle back to earth (denouement). If I've done my job well, you'll feel like everything that happened was meant to be!

Try these:
*See if you can find the exposition, rising action, conflict, climax, and denouement in your favorite book
*Can you reorder some of the events without altering the outcome of the story?

The fourth chapter is "Heroes and Villains." It introduces these concepts: character, protagonist, antagonist, viewpoint, first person, and third person.

The fifth and final chapter is "Wordsmiths." It introduces the following: figurative language (more can be found in the glossary), diction, and dialogue.

I found Creative Writing to be packed with information in a reader-friendly way. I thought they did a great job in defining terms. I think the book could be just as useful for helping people talk about literature (stories, poems, novels, etc.) as it is for helping people write creatively.