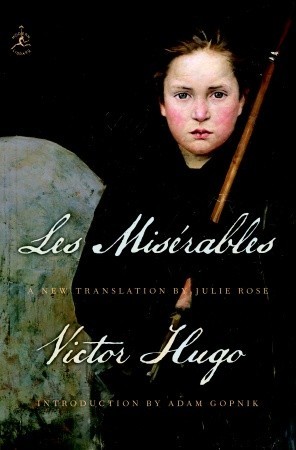 First sentence: In 1815, Monsieur Charles-Francois-Bienvenu Myriel was bishop of Digne. He was an elderly man of about seventy-five and he had occupied the seat of Digne since 1806.


I will probably end up cutting and pasting summary bits from other reviews because the plot hasn't changed.

From my 2017 review,
Premise/plot: An ex-convict does his best to live life according to his conscience. Will it ever be enough?

Premise/plot: Jean Valjean is an ex-convict who seeks shelter from Bishop Myriel one night. Though he's been treated only with kindness, Valjean in his bitterness (he was sent to prison for stealing a loaf of bread), he steals the bishop's silver. When the theft is discovered, the bishop is all compassion telling the officials that there has been a misunderstanding. Valjean did not steal the silver; it was given as a gift. In fact, he's happy to give Valjean his silver candlesticks as well. Valjean is shocked and overwhelmed. The meeting turns out to be quite life-changing.

When readers next meet Valjean, he has a new name and life. Monsieur Madeleine is a successful business man. He has a BIG heart. He's always giving. He's always thinking of others. He's always doing what he can, when he can to make a difference when and where it matters most. One woman he is determined to help is a young, single mother, Fantine. Circumstances have separated Fantine from her child, Cosette, but, Valjean is determined to correct as many wrongs as he can in this situation. He will see to it personally.

Unfortunately, his past catches up with him. He learns that a man has been arrested; "Jean Valjean" has been caught. Of course, Madeleine knows this is nonsense. Can he let another take his place in prison? If he tells the truth then he can no longer help the poor, but if he doesn't tell the truth, how could he live with himself? He does the honorable thing--though it is one of the greatest challenges he's faced so far.

But that means, for the moment, that Cosette is left in unpleasant circumstances...

There comes a time, an opportunity for Valjean to escape. What he does with his freedom--this time he's assumed drowned, I believe--is go and find Cosette. The two become everything to one another. Cosette is the family he's never had, never even knew he needed or wanted... the two end up in Paris.

Almost half of the novel follows the love story between Marius and Cosette. But it isn't only a love story. Marius is a poor man in conflict with his rich grandfather. The two disagree about many things. But their main source of disagreement is politics. At first, Marius is swept up in his father's politics, with a new awareness of who his father was as a soldier, as a man, as a possible hero. But later, Marius begins to think for himself, to contemplate political and philosophical things for himself. He becomes friendly with a political group at this time. But his love of politics dims when he falls in love with Cosette...and she becomes his whole reason for being. For the longest time these two don't even know each other's names! This romance isn't without challenges...

My thoughts: I love, love, love this novel. I do. I love to love it. I love to reread it every other year or so. I've come to know the characters well. This is both a good thing and a bad thing. Good in that these characters are memorable and worth knowing and mostly loving. Bad in that it's hard for me to watch film adaptations of Les Miserables without cringing. When writers rewrite Hugo's characters, I have little tolerance. I have some tolerance for condensing or leaving bits out altogether. After all, I don't expect a movie to go scene by scene through the novel. Much is introspective after all. One can film a man "thinking" perhaps but not capture on film his thoughts.