World at War: The Girl With the White Flag 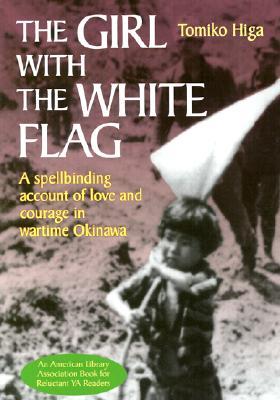 First sentence from the introduction: On June 25, 1945, on the war-ravaged island of Okinawa, a young American army signal corps photographer took a remarkable photograph. It showed a little barefoot girl in tattered clothes waving a piece of white cloth tied to a crooked stick.

First sentence: I was born in Shuri, the ancient capital of Okinawa, which is now part of the city of Naha.

The Girl with the White Flag is the story of the author's childhood in war-time Japan. It begins by giving the reader ample background into the time and culture and place. We meet our heroine, a young girl who throughout the book spans the ages of five through seven. One of the first events she shares with readers is the death of her mother. She then relates what life was like with her father, two older sisters, and her older brother. This portion is hard to navigate. I think in some ways it is just as hard for modern readers to understand the family life--the harshness, the strictness, the discipline, as it is to understand the monstrosities of war and soldiers and starvation. (Or maybe that's just my take on it.)

About halfway through the narrative, the father disappears. He was on his somewhat routine mission of delivering food to the Japanese soldiers, but on this occasion he never returned home. The four children are left to fend for themselves. The American soldiers have just begun their invasion, their battle to capture this island. The children become refugees and the fight to survive has begun. The children ranged in age from 17 to 6. Somewhere along the way, however, two things happen--big things--that make this event even scarier: 1) Their brother dies one night from a stray bullet. 2) Within a few days of burying their brother, our narrator--the six/seven year old girl becomes lost--separated--from her sister.

The book recounts what it was like to be seven and alone and wandering in and out of danger. There was no safe place. Not really. Japanese soldiers weren't "safe." In fact, in her brief encounters with them she was almost killed. No, being near soldiers wasn't safe. The only "safe" soldier was a dead soldier. She did in fact scavenge around the dead soldiers looking for food.

Her will to survive was strong. Her stamina incredible in my opinion. The sights. The sounds. The smells. All surrounded her. Could have potentially traumatized her and paralyzed her into inaction.

If there is power in the Girl with The White Flag it is in its rawness, its simplicity, its boldness when it comes to being straightforward and honest. The story is incredible is powerful because it's true. Here is an eyewitness account of what it means to be seven and a refugee in a war zone. It can be brutal. It can be intense. But there is more to it than that.

I found The Girl with The White Flag to be an incredibly compelling read, a must-read for adults.