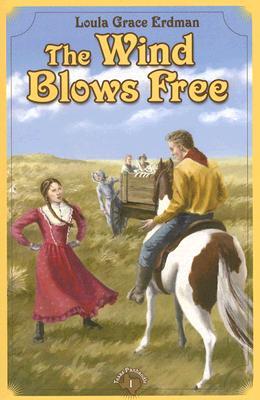 First sentence: Melinda Pierce sat on the green plush seat of the railroad car, listening to the mocking song the wheels of the train were singing. All the way up from East Texas they had said the same thing--"Going away. Going away. Going away," they wailed. And sometimes they added, "Poor Melinda. Poor, poor Melinda."

Premise/plot: Set in the Texas Panhandle in the 1890s, The Wind Blows Free introduces us to the Pierce family. The father has lost his store and is resettling the family from East Texas to the Texas Panhandle. It will require more than a little adjusting. For example, going from wood or coal as a fuel source to COW CHIPS, or, going from a house with floors and carpets to a dirt floor. Melinda knows that she will not like it here; she is counting down the months, weeks, days, and hours until she can go back East. Her grandmother has promised that she can attend a high school back in East Texas--the same one her mother attended, I believe. But when the time comes will she be ready to say goodbye to her family?

My thoughts: In the 1950s, Loula Grace Erdman wrote a historical trilogy set in the Texas Panhandle. Each book was narrated by a Pierce sister. The first book by the oldest, Melinda, the second book by the middle sister, Katie, the third book by the youngest, Carolyn. (There are NO BOOKS on the twins, Bert and Dick.) The novels are not necessarily dependent on one another. The age of each heroine happens to be fifteen. So in some cases, quite a few years have gone by since the previous book. But of course, if you've got access to all three books, I'd recommend reading them in order!

For those interested in pioneer stories, this will prove an interesting read. It isn't quite the same time period of the Little House books (it's set a few decades later), but the pioneer-feel is the same.

I enjoyed this one more the second time. (I first read it in April 2012.) I gave more attention to the relationships this time around--notably that of Melinda and Dennis Kennedy and Melinda and Annie Foster.

This one is not what you'd call politically correct. It was written in the early 1950s and set in the 1890s. Native Americans are called Indians. The Pierce children especially seem afraid of potentially encountering Indians. They become a little bit more comfortable with the move after being assured that all the Indians are now living on reservations. The mother has passed along a family story or two of a past Indian encounter. This would be with the great-great-grandmother in Georgia. This story both thrills and frightens with each retelling. The girls go through a 'scary' encounter with an Indian that turns out to be TALL GRASS. It is what it is. I don't know that it does any good to pretend that history was different than what it was or to make fictional heroines radically counter the culture and times in which they lived.