It’s time, everyone! It’s time for the Blogging for a Cure effort to begin! Seven cheers for all the bloggers who will be highlighting some of the 2007 snowflakes and the illustrators who created them in the name of helping to raise money to fight cancer for the Dana-Farber Cancer Institute. Back in September, the call to bloggers began, and over 70 bloggers responded, saying that they’d like to do what they can in this multi-blog, cross-posting effort to drive traffic to the online Robert’s Snow auctions and help raise money, we hope, for cancer research. And it’s all in the memory of Robert Mercer, Grace Lin’s husband, who recently passed away due to a rare form of cancer.

For those of you still new to the Robert’s Snow auctions, here’s a brief explanation: Robert’s Snow is Grace’s book, published in 2004, about a mouse not allowed in the snow. The story was inspired by Robert’s battle with Ewing’s sarcoma. After the book was published, Grace gathered artists from all over the children’s book illustrating community to create special snowflakes to be auctioned off, with the proceeds benefiting sarcoma research at Dana-Farber. These snowflake auctions became known as the event “Robert’s Snow.”

This year, more than 200 well-known children’s book illustrators from around the world have been given a five-inch wooden snowflake to decorate at will. Like actual snowflakes, each design is unique. The 2007 online auctions for bidding on these hand-painted snowflakes will take place in three separate auctions, open to everyone, from November 19 to 23, November 26-30, and December 3-7. You can read here for more information. 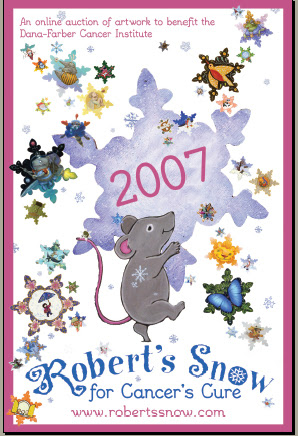 But starting today — and lasting for over one month until the day before the auctions — over 65 bloggers will be highlighting some of the snowflakes and the illustrators who created them (let me stress that just some of the illustrators will be featured — many more snowflakes were created by talented children’s book illustrators, which we will not be featuring, simply due to time restraints). More devoted bloggers than I can possibly count have agreed to post the schedule of these illustrator features (in addition to those bloggers doing the actual write-ups on the snowflakes and their creators), and 7-Imp will commit to having the master schedule each day. So, bottom line: It will be a cinch for folks interested in bidding on a snowflake to find all the spots in cyberspace where bloggers will be featuring them and the talented folks who created them. We hope their interest is so piqued that they go and purchase a snowflake (or two or three).

Here’s today’s schedule. Thanks to all the bloggers who are so committed to this fundraising effort!

* * * Michelle Chang, featured by The Longstockings

* * * Barbara Lehman, featured by David Elzey at the excelsior file