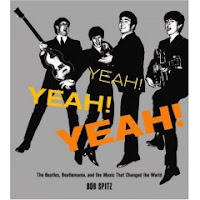 Spitz, Bob. 2007. Yeah! Yeah! Yeah!: The Beatles, Beatlemania, and the Music That Changed the World.

It is not easy for a book to cover the Beatles (pre, early, mid, late, and post) and do justice to the Fab Four. This one almost does. (Don't pay attention to the almost--not yet.) The book opens with the casual--yet fateful--meeting between John Lennon and Paul McCartney in July 1957. John was playing with his own group, the Quarry Men, and Paul McCartney was one of the 'kids' (teens) in the crowd. (The two were introduced by a mutual friend, Ivan Vaughan.) It discusses why this meeting was instrumental in the history of rock and roll. While I think this paragraph is a bit over-the-top, it does give the reader a sense of the importance:

Miracles, such as they are, occur at the most unexpected times--and in the most unusual places. That John Lennon and Paul McCartney met at all is an amazing phenomenon; that it happened in Liverpool, England, of all places, is even more remarkable. (8)

I don't think it was a 'miracle.' For one thing, this didn't happen in an unexpected time and place. Liverpool in the fifties--and even earlier--was a place where music was big. As a port town, it saw a lot of music come and go. New styles, new records, new songs, new artists introduced that most cities (towns, whatever) didn't have a clue about. If something *new* was happening on the music scene, Liverpool knew about it first. There were nightclubs and venues of all sorts for those musically inclined. And this magic that was rock and roll was widespread. It seemed that to be a Liverpudlian and a teenager meant one thing: you were either in a band or wanting to join a band. These homegrown, teenage bands were big. The miracle wasn't that the two met and started a band. The miracle was the fact that out of all the bands in Liverpool, all the bands in England...that they were the ones that would become rich and famous and change the world. It was the fact that they outgrew their small pond and went on to larger towns, cities, venues...that was out of the ordinary.

The book then begins tracing the lives of John, Paul, George, and Ringo as they join the band. John and Paul come first naturally. And the other mini-biographies are grafted in as the band grows and changes. From this point, the book takes a chronological look at the band that changed rock music--the sixties--forever. It spends most of the time focusing on the years 1960-1970. The decade that saw the rise and fall of the Beatles.

Beatles books are known for being biased most of the time. Authors are almost forced to take sides when it comes to writing the narrative. Will they take Paul's side? John's side? See George as an under appreciated artist whose time in the Beatles was too restricted? Will the author be pro-Cynthia or pro-Yoko? Bob Spitz almost avoids this altogether. (There's that almost again.) His focus is on John and Paul. It is rare for him to sidestep and shed some attention on Ringo and George. Rare, but not unheard of. In many ways, the story of the Beatles in the 'late' period was a tug-of-war. On one side Paul, on the other side John. The others were there, often unhappy, sometimes speaking up for one or the other. But this wasn't their battle. [It is like John and Paul were so focused on arguing with the other--on being 'right,' on winning that argument against the other, that they couldn't see or hear George and Ringo.] As far as relationships go, Bob Spitz really stays out of the private lives--the bedrooms--of the stars. Yes, Yoko gets her treatment at the end. How her 'presence' in the studio, and her vocal 'contributions' irked and annoyed the other three. But his narrative doesn't get personal (or as personal) like so many other narratives do.

This book--this narrative--is focused mainly on the music. It covers their lives in the studio and on tour, but only as it relates to the music, the show, the performance, the end result. It doesn't focus on the sex and drugs of the phrase 'sex, drugs, and rock 'n roll'. Drug use is mentioned briefly, but knowing how heavily the group used drugs, it barely scratches the surface. (It doesn't mention the drug arrests at all.) And sex is hardly mentioned at all. Yes, we're told that John married Cynthia secretly when he learned she was pregnant. But there are no scandalous reporting of the rock 'n roll lifestyle. No real mention of groupies and no focusing on extramarital affairs. It might warrant a "life on the road made marriages difficult" line. But having read plenty of biographies, again this barely scratches the surface. The truth is that while these four men were great musicians, they often made lousy husbands, fathers, and boyfriends. If not for the affairs, then for their negligence stemming from heavy drug use.

I haven't decided if this purging is a good thing or a bad thing. On one hand, it makes for a 'cleaner' read. Most of the scandals--but not all of the scandals--have been brushed aside completely, or given a quick non-abrasive statement or two. It does place the emphasis on the music. It does place the emphasis on their genius as musicians. Their talent singing, writing, performing. Their creativity in the studio. The text does a great job in providing commentary when it comes to the music and the songs. And part of me sees the wisdom is separating their lives out into their professional and personal, private lives. It is better for a musician to be esteemed because of their work--remembered for their work--than to become a circus act of personal mistakes. An exhibitionist when it comes to personal chaos. (Britney, anyone?) Plus, I think in many ways, the scandals read more like gossip. This book tries to be gossip free.

What I enjoyed about this one? I think it is a great introduction to the Beatles. It covers the essentials. It does so in a fair way. It is straightforward. It is chronological for the most part except for the first chapter. While more attention is spent on the first five years than the last five years, it seems right somehow. It is full of pictures--photographs--of the Beatles and other key figures of the times. The sidebars were informative gems. The back matter (discography, selected bibliography, and index) were well done. If this had been a perfect book instead of an almost perfect book, then there would have been footnotes or endnotes linking up which quote came from which book. But as it is, I'm happy with this almost perfect book about the Beatles. Another thing that made this one great? While it serves as a good introduction for this younger generation, it makes for a great read for those more knowledgeable as well. There were quite a handful of I-didn't-know-that facts sprinkled throughout. Little bits of trivia that I had not heard before. So it truly has something for everyone.

For a personal look at my flirtation and indulgence in Beatlemania. See my post on Reading with Becky.
Posted by Becky at 9:37 AM

Have you ever seen the Beatles Anthology DVDs? I got them one at a time, space with lots of other stuff in between, from Netflix, and I think that's the best way to watch it. All at once would be overwhelming. And while these sorts of books are nice (and I've read a few) I liked the DVDs because you get to hear the music and see concert footage, etc.

I haven't seen the Anthology DVDs. But I did watch the televised broadcast in 1995. I would imagine that except for some extras, they'd be about the same. I would love to watch the dvds sometime though. I didn't find it overwhelming to watch it in three days. But I did find it very obsessed-making. It through me into a Beatle-frenzy.

I'm getting ready to post about this on Reading With Becky

Off the subject, but I wonder if anyone is hosting a "J" books challenge. I'd love to read a book a month in that category. :<)

Nan, that's a good question. There would probably be several people interested in it. I'll consider hosting it myself...