Preview of The Starry Rift 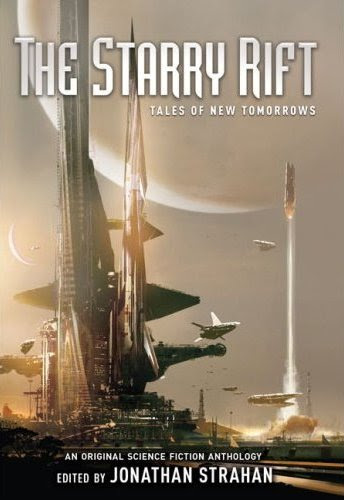 I'm reading The Starry Rift: Tales of New Tomorrows. It's a collection of new science-fiction stories. I'll have a full review later--a more complete review in a traditional way--but I thought I'd highlight the ten I've read. (There are sixteen altogether.)

1. Ass-Hat Magic Spider by Scott Westerfeld (in Starry Rift, 2008)*
One of the best, best, best short stories ever. What would you do for a favorite book? Would you starve yourself? Shave your head? Meet the boy who’ll go to any extreme to keep his favorite book intact as he heads for a new home in the stars.
2. Cheats by Ann Halam (in Starry Rift, 2008)*
A short story about virtual gaming–the blending of the virtual world with reality. Not a favorite by any means. But okay.
3. Orange by Neil Gaiman (in Starry Rift, 2008)*
An unusual way to read a story, isn’t it? All answers, no questions. But it works in an odd kind of way. But it leaves me wanting more.
4. The Surfer by Kelly Link (in Starry Rift, 2008)*
I liked this one for many reasons. A boy is kidnapped (by his father) and taken to Costa Rica. Once they arrive–they and the whole plane of passengers–are put in quarantine. It seems there has been an international flu (or other disease??) outbreak and thousands upon thousands upon thousands are dead. While these strangers get to know one another in relatively cramped quarters, the boy begins to learn about life. I liked it because the father–a doctor–brought along a suitcase or two full of science fiction books–paper backs mostly. And these books become a lending library of sorts. There’s reading of sci-fi, soccer, talk of politics, and aliens. A little bit of everything to please everyone.
5. Repair Kit Stephen Baxter (in Starry Rift, 2008)*
It was okay. But it was like Data’s head. Too confusing to comprehend.
6. The Dismantled Invention of Fate by Jeffrey Ford (in Starry Rift, 2008)*
And I thought Repair Kit was confusing! I suppose some might like it. But it’s weird.
7. Anda’s Game by Cory Doctorow (in Starry Rift, 2008)*
I saw the title and thought, “Hey, I just bet they’re playing on Ender’s Game!” and I was right

It was an okay story. Much much better than Repair Kit and Dismantled Invention. But it didn’t capture me the same way that Westerfeld’s story did. So it’s among the more interesting ones I’ve read thus far…
8. Sundiver Day by Kathleen Ann Goonan (in Starry Rift, 2008)*
Not really my kind of story. I could follow most of what was going on. And it was vaguely interesting. But it was more weird than interesting.
9. The Dust Assassin by Ian McDonald (in Starry Rift, 2008)*
I liked this one. Didn’t love it. But found it interesting. A girl–on the verge of womanhood–is told (I can’t remember if she overhears this news or if she’s told directly…) that she’s a weapon. Her family is at war with another family. Both want to rule, want the power–undisputed and uncontested power. The opposing family has a son. They have a daughter. I’ll let you figure out the rest…her destiny to “be a weapon” is the theme of this one all about revenge, destiny, and the meaning of life.
10. The Star Surgeon’s Apprentice by Alastair Reynolds (in Starry Rift, 2008)*
It was okay. But not really one I *liked* it was too bloody for me. Almost like how The Island of Dr. Moreau was too bloody for me. A surgeon who loves lobotomies–giving them of course–and robotics gets his comeuppance but not without a lot of yucky descriptions.

I'm not a science fiction fan, but any book containing a story called Ass-Hat Magic Spider MUST be amazing. That is seriously the best title I've ever heard!

I just got back from adding this to my wish list...thanks, Becky!!!

This sounds so good Becky!! I'm going to add it to the wishlist now. What a fantastic set of authors!

I picked this up from the library the other day and look forward to cracking into it sometime in the next month.