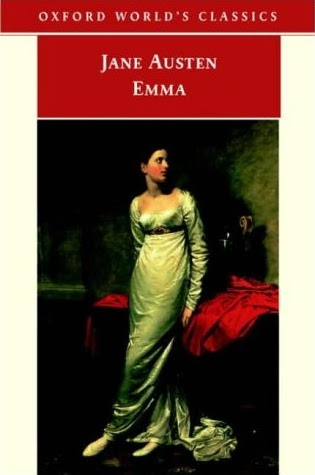 Emma Woodhouse, handsome, clever, and rich, with a comfortable home and happy disposition seemed to unite some of the best blessings of existence; and had lived nearly twenty-one years in the world with very little to distress or vex her.

I have a love-hate relationship with Emma. You see, I don't like Emma, the character. On the other hand, Emma is a fun treat because she's so very clueless. She is unaware of herself. She's unaware of the world around her. She just doesn't get it. Once the reader is aware of this, knows that Emma is the joke of the book--an inside joke shared between the reader and the author, then it's a fun book. The reader has a clue while the heroine is helplessly stuck on herself and her misconceptions about reality. Emma may think she's wise in matters of the world, of the heart, of the home. But the reader knows better!

The plot of this one is relatively simple: Emma thinks she's good at matchmaking. Pairing up single men and women. But the fact that she misreads signs of affection and devotion left and right mean that the unfortunate soul she's trying to do good by is in for a messy few months. Emma is the last person who should be giving out advice. In a way, the relationship between Emma and Harriet reminds me of that of Don Quixote and Sancho Panza. Emma is promising Harriet a fine match with a good man, a man of some means, a true gentleman, and handsome too. Just like Don Quixote keeps promising Sancho that he'll reward his service by making him a governor of some province (or the like). But in reality, the faith that their loyal friends place in them is hopelessly misguided.

Of course, the book is more than just about Emma and Harriet. It also features the much-praised Jane Fairfax and the mysterious Frank Churchill. I don't have an opinion of Jane Fairfax really. She's much more patient than I would expect any girl to be under the circumstances. But since we only see her through Emma's eyes, it's hard to know what she's really like. Frank Churchill, I definitely have an opinion of...I think he was awful...and I really have no sympathy at all for him. I think both Emma and Jane have reason to be ticked. And he wouldn't have gotten off that easy if I'd been Austen. Then there is the true hero of Emma, Mr. Knightley. If there is redemption in Emma it is found in the character of Mr. Knightley. He kept me reading.

I love Emma, especially the movie starring Gwyneth Paltrow. Haven't read the book yet though.

When I was scrolling down and saw that you'd reviewed "Emma" I just thought: "You did it! Oh, well done!" I'm so glad. :)

I wonder if some of the reason I really like Emma, the book, is because Mr. Knightly is such the perfect foil for her. I like him. Even though -- as a friend put it -- he can be patronizing at times.

I tried reading Emma this past week. I just could not get into it. I did skim through it as I wanted to know the plot line but beyond that ...it did nothing for me. That was disappointing as I so loved Pride and Prejudice and wanted to love Emma.

Your review was well done. Now, how well did you like the book?

I just love, love, love Persuasion and Pride and Prejudice. I am lukewarm on Emma. I don't hate it. I don't love it. I came to appreciate certain aspects of it more than I've done in the past. But it's not love. I just dislike the character too much for it be love.

Becky, I'm with you -- I love, love, love Persuasion and Pride and Prejudice (and I also really enjoyed Sense and Sensibility), but I just have never gotten into Emma. However I am determined to read it this year. Thanks for the great review.

Thank you, Becky, for helping me to understand why I did not like Emma. She was a heroine I could not love (because of her inability to see her own faults). I'm pretty sure I've tried to read the book more than once, but couldn't get past her personality. Maybe now I'll give it another try.

I must have read Emma around 5 times now and my views are similar to what you have said.We can't like Emma ,she is prejudiced, near sighted and has all the qualities the rich ppl of that period showed.But still there is a charm about her,she makes you laugh because you know she is gonna end up in a soup due to her rather immature match making talents.I read it when I feel I need to relax a bit.