The ABC's of Kissing Boys 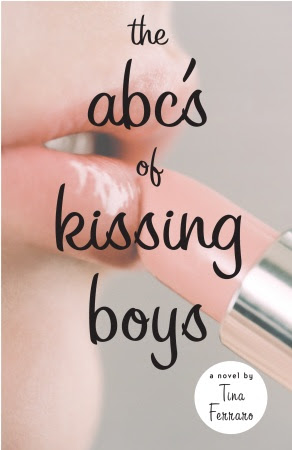 Can a girl fall for the boy next door even if he's a freshman...and she's a junior? That's the question in Tina Ferraro's latest novel, The ABC's of Kissing Boys. Parker Stanhope's life is on a downward turn. She plays soccer. That's who she is. Yet when she begins her junior year playing junior varsity--again--instead of moving up with her peers to varsity, she's angry, frustrated, bitter, disappointed. Dropped by her friends and former teammates, Parker is having to redefine herself. But Parker's not going to let her dreams go all of a sudden. No, Parker has a plan. And for that plan to work, she needs a man or two in her life to step up.

Luke. Her brother's friend. She's paying him to do her a favor. It's complicated. But it will involve a very public kiss at the school's sports fair's kissing booth.

Problem is, she doesn't know how to kiss--really kiss. So she needs a tutor. Enter the boy next door, Tristan--never mind the fact their families are feuding. He's tall enough and cute enough...but there's one big problem...he's a freshman. Still, despite his status, he might just be the man for the job. Can he teach her what she needs to know to get her life back on track? Maybe. Possibly. But will she be able to let him go when the job's done?

The book is a bit more involved than that--more than just the kissing bits--there's a good bit about friendship and popularity and finding yourself. You know, typical YA drama.

I liked this one. I did. I liked Tristan. It was a fun little book. A satisfying one.

I'm looking forward to this one. It looks cute, and I was surprised by how much I loved "How to Hook a Hottie." Also, my teens are going to love this cover - this one will need no help to circ!

Sounds like a book my students would love!
Beth Fehlbaum, author
Courage in Patience, a story of HOPE...
http://courageinpatience.blogspot.com
Ch. 1 is online!

I've added this one to my wish list! I'm going to have to stop reading your blog if I want my TBR pile to go down not get bigger lol!! Thanks for another great review!!

Becky, you have a serious talent for reviewing books. This is dangerous since my TBR and wish list is out of control! Your review has me wanting to read this book. Ugh!