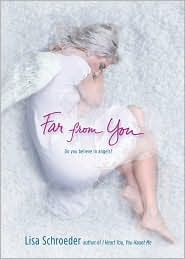 I may not have been the most enthusiastic reader of Lisa Schroeder's first novel, I Heart You, You Haunt Me, but I was intrigued enough by her writing to seek out her second entitled Far From You. And I'm so glad I did!

Far From You is a verse novel narrated by the very angsty Alice. (Yes, she was named after that Alice, the one that went down the rabbit hole.) And Alice's problems are understandable. Still grieving the loss of her mother--cancer, I believe--she is upset (angry, bitter) with her father remarrying and starting a new family. Yes, when the novel opens, Alice is about to become a big sister. Her stepmother, Victoria, brings home a baby girl, Ivy. But Alice is so spent feeling sorry for herself she just doesn't get it. Babies are cute and adorable. (Of course, babies can be loud and stinky and worrisome too). Alice has a few things going for her. She's got her music--she loves to play the guitar and sing at her church (not a traditional church); she loves to hang out with her best friend, Claire, who attends church with her and sings, I believe; she is just crazy about--head over heels--with her boyfriend, Blaze (though she can't decide if she's ready to go all the way with him or anyone really).

But Far From You is a story of how Alice's world turns upside down and inside out. Thanksgiving. The powers that be (a.k.a. parental units) have decided that the family--the whole family--should drive to see Victoria's parents. After all, they have a new baby to show off. Alice is bummed to say the least. Victoria's parents aren't her family--or are they?--and why should she be stuck in a car with a family she can't stand? When her father has to leave unexpectedly on business leaving Victoria, Alice, and Ivy to drive back home...the unthinkable happens.

Here's the first poem in the book. (The prologue occurs during the climax of the book and then the book goes back and starts at the beginning.)

We're alone
with only
the cold
and dark
to keep us
company.

I know them
so well now,
they're like
old friends.

Old friends
who have stayed
too long
and need to go.

I wish
the angel
would have stayed.

For a second,
I felt warmth.
I felt safe.
I felt love
as she whispered
my name,
"Alice,"
and floated
toward me
before she
disappeared.

Was I dreaming?
Hoping?
Hallucinating?

So hungry.
So tired.

I look out the window,
and although it's dark,
the moon
illuminates the scene
as if a faraway
floodlight
is hung
from the sky.

So much whiteness.
Everywhere.

Let us fly
away
from
here.

I knew by the second poem, "Softly Snowing" that I just had to read this one. The premise. The characters. The pacing. The imagery. Everything worked on this one.

You are way better at following up than I am. If I can't warm up to a writer with the first book, I usually won't try again. Good for you! It paid off.