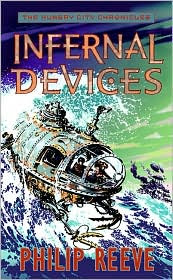 Infernal Devices is the third novel in the Hungry City Chronicles. (I reviewed Mortal Engines and Predator's Gold last week.) The novel begins roughly sixteen years after the close of Predator's Gold and eighteen years after the close of Mortal Engines. Our main character, Wren, is the daughter of Tom Natsworthy and Hester Shaw. This once-adventurous pair has been settled in Anchorage--a city who roams no more--for sixteen years. And Wren--though she's heard differently, of course--believes that her parents have always been boring. B-O-R-I-N-G. Wren wishes that she could live even half as adventurous life as her parents. Anchorage holds little interest to her really. But little does she know that her dreams are about to come true. Or that those dreams would turn nightmarish.

When the Lost Boys reappear (secretly of course) in Anchorage with a task for Caul, their former companion, then certain things are set in place. You see even though Caul refuses to steal what they've come for--The Tin Book--there is one person in town who will. Wren. She makes a bargain with the leader of the Lost Boys. She'll help them steal the book, if they'll let her join them. Of course, she doesn't know what she's asking...not really. And when the job goes wrong, really wrong, Wren ends up kidnapped by the very people she thought were on her side. And then her kidnappers get kidnapped. Poor Wren, now a slave to MAYOR Pennyroyal and his wife, Boo Boo, is living in Brighton...and things just aren't going as Wren wants.

Tom and Hester, of course, are ready to resume their adventures in order to save their daughter--their only daughter.

Of course, there are villains in Infernal Devices. The Green Storm anti-tractionist faction who are all-war, all-the-time. And there are Stalkers--some of whom we've met previously Stalker Fang and Stalker Grike--and the humans that sometimes control and manipulate them. But the good guys can create enough tension on their own.

It is a truth universally acknowledged that a fake explorer in possession of a good fortune must be in search of a wife, and Pennyroyal had got himself saddled with Boo-Boo Heckmondwyke. Fifteen years earlier, when Predator's Gold was topping the bestseller lists aboard every city of the Hunting Ground, she had seemed like a good idea. Her family were old Brighton aristocracy, but poor. Pennyroyal was a mere adventurer, but rich. The marriage allowed the Heckmondwykes to restore their fortunes, and gave Pennyroyal the social clout he needed to get himself elected mayor. Boo-Boo made an excellent wife for a man of ambition: She was good at small talk and flower arrangements, she planned dinner parties with military precision, and she was expert at opening fetes, galas, and small hospitals. Yet Pennyroyal had come to regret his marriage. Boo-Boo was such a large, forceful, florid woman that she tired him out just by being in the same room. A keen amateur singer, she had a passion for the operas of the Blue Metal culture, which went on for days with never a trace of a tune, and usually ended with all the characters dead in a heap. When Pennyroyal annoyed her by questioning the cost of her latest frock or flirting too openly with a councillor's wife over dinner, she would practice her scales until the windows rattled, or crank up her gramophone and treat the household to all six hundred verses of the Harpoon Aria from Diana, Princess of Whales. (183-184)

There is action, adventure, family drama and dysfunction, and humor. I just love the names of some of the flying machines in the book: The Visible Panty-Line, the Itsy Bitsy Teeny Weeny Yellow Polka-Dot Machiney, Is That All There Is?, and Damn You, Gravity!

© Becky Laney of Becky's Book Reviews
Posted by Becky at 8:21 AM

Just reading your review made me laugh! "- which went on for days with never a trace of a tune - " (if I had to endure that I think I would find the ending with "all the characters dead in a heap" very satisfactory) and Damn You, Gravity! - that's just wonderful!

I can't help wondering - have you ever read Terry Pratchett? L.