What Would Emma Do 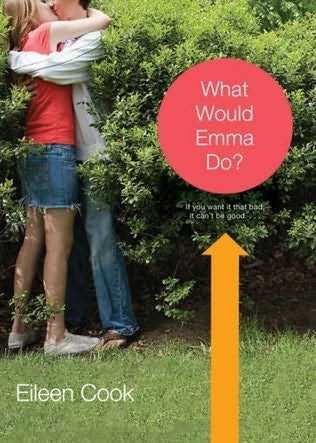 Modern-day Crucible. That about sums this one up. Set in a small-town in Indiana, Emma (Elizabeth) Proctor attends a private school--a Christian school--and church. It seems anyone and everyone is a believer in Wheaton. (At least on the surface.) Even the title is a play on words, What Would Jesus Do. Emma thinks sitting around and discussing WWJD is pretty lame. She thinks everything that goes on in Wheaton is lame. She's counting down the days, weeks, months until she can leave town forever without once looking back. But before Emma can leave, she has to clean up some of her messes.

The kiss. Her best friend's boyfriend. D'oh. What's Emma to do? Her best friend has 'forgiven' her but does she really and truly trust her? What do YOU think? So when Emma asks Colin (the boy in question) to take her to a party at "The Barn" she knows she's bending and stretching the rules. After all, Joann would never be okay with the two of them hanging out together without her. But an impulsive decision on her part starts her down a long road where she doesn't want to be heading...

Emma and Colin witness something. Something with consequences. No one knows they know. The right thing to do, of course, would be to come clean. To stop this witch-hunt before it even begins. But they don't. And they don't. And chaos sets in. Everything becomes topsy-turvy as the mob mentality takes over. Soon it becomes a "crime" to be different in any way... How long will Emma let this go on? How many innocent people have to get hurt before she steps up and does the right thing?

I liked The Crucible-ness of it. What I'm slightly on the fence about is the irreverence of elements of the story. Each chapter begins out with her 'prayer' to God. It's not out-and-out disrespectful. It's casual. Perhaps too casual--her praying for breasts and listing all the 'good things' she'd do in return if he'd grant her wish. It's questioning. In a way, I think it's down-to-earth and authentic-sounding. It feels honest like it is how a person might feel. However, Emma's vision of God isn't the God in the Bible. And if she was versed in the Bible, I think her tone would be different. That maybe just maybe she wouldn't see herself as being smarter than God and better able to manage the world. These sections--I liked some of them, but a few rubbed me the wrong way. Not enough to dislike the novel as a whole. But I could definitely see how some readers might find a few phrases offensive. I've selected one--not as an example of one I dislike in particular--just one that I think represents the essence of what they're like.

God, you know the Bible story about the tower of Babel, where no one can understand anyone else? Sometimes I think I'm living out that story. Everyone around me is speaking English, but we don't understand one another at all. I have to tell you, if I were going to pick a Bible story to live out, this wouldn't be it. I would prefer to be in the garden with a cute Adam (no fig leaf required). No disrespect to Eve, of course. To be honest, I would prefer Noah's ark, even with the catastrophic flood aspect. I like animals. In fact, I like animals more than I like most people I know. Then again, if I have to live out a Bible story, the Babel story is better than most of Revelation. The horsemen of the apocalypse freak me out. (81)

Do you think her tone is the author making the character sound rebellious?

Yes, J. Kaye, I think you might be onto something. Her voice sounds like the early-early stages of rebellion. After all, even in church-going circles, it's not unusual for teens to stop going to church and do their own thing...though some always make it back after their college years.

You are right. Most teens do come full circle, even the seriously rebellious teens. We've been through one. Two more are taking his place...lol!

it happende to me before i kissed my best friends BOYFRIEND

I'm wondering what age group this book is geared towards. Would you say ages 11-14 would be appropriate for this story? Also, are there themes of creating an identity and self esteem involved? I was going to use this book for a project in my Young Adult Literature class. Thanks!

Nicole, 11 might be a *little* young for it. But I don't think there's anything horribly inappropriate in it that would make it a "bad" choice for 11. But a little older might be better--say 13-15. It really just depends on the individual reader :)