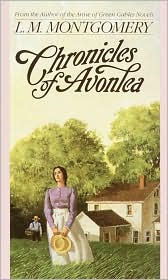 Montgomery, L.M. 1912. Chronicles of Avonlea. Bantam Classics. 183 pages.
Chronicles of Avonlea is a short story collection by L.M. Montgomery, the author of Anne of Green Gables. These stories are all set on Prince Edward Island. Several of them are set in Avonlea and feature references to the unforgettable red-headed orphan, Anne Shirley. At the time this book was originally published, the Anne series consisted of two books: Anne of Green Gables (1908) and Anne of Avonlea (1909).
There are twelve stories included in this collection:
The Hurrying of Ludovic
Old Lady Lloyd
Each In His Own Tongue
Little Joscelyn
The Winning of Lucinda
Old Man Shaw's Girl
Aunt Olivia's Beau
The Quarantine at Alexander Abraham's
Pa Sloane's Purchase
The Courting of Prissy Strong
The Miracle at Carmody
The End of a Quarrel
Several of these stories are quite memorable. Especially "The Hurrying of Ludovic," "Old Lady Lloyd," "The Winning of Lucinda," and "The Quarantine at Alexander Abraham's."
What makes these stories memorable? Well, it could be that they're full of eccentric characters. Montgomery had a way of writing eccentric that made eccentric a good thing.
The Hurrying of Ludovic, for example, is about the slow courtship of Theodora Dix. Ludovic Speed has been courting Theodora for fifteen years. An indecisive man to say the least, he needs to be "speeded" up according to Anne. And that is just what Anne sets out to accomplish. Will she do it? Can Theodora get her happily ever after with a little help from Anne?
Old Lady Lloyd is a more sentimental short story. Perhaps it's the most melodramatic of the bunch. It features an old woman, "Old Lady Lloyd" who is quite poor but proud. Her neighbors think she is rich but stingy. But her pride is about to be tested when she learns that the daughter of an old beau of hers, Sylvia Gray, is in town. She's the new music teacher. She loves her. She represents the daughter she could have had--would have had--if not for her foolish pride. So she becomes a "fairy" god-mother of sorts to the girl. She gives her presents--anonymously--and watches her from afar. As the summer progresses, Old Lady Lloyd's heart begins to thaw and she becomes more and more in touch with her humanity, with her feelings. (I warned you it was sentimental.)
"The Winning of Lucinda" is a great story because it is funny. It's about two very stubborn people: Lucinda and Romney. These two cousins courted and quarreled. In fact, they were engaged--still are engaged. It's been years--fifteen years to be exact. But Lucinda said she would never say another word to Romney, and Romney said he wouldn't speak to her until she spoke to him first. Is there hope for this couple yet?
"The Quarantine at Alexander Abraham's" is about two very cranky people finding love. One is a man-hater, cat lover, Angelina Peter MacPherson. And the other is a woman-hater, dog-lover named Alexander Abraham Bennett. Through chance, these two along with William Adolphus (cat) and Mr. Riley (dog) get quarantined together when there is an outbreak of small pox. It's a great story--a fun story.
I enjoy L.M. Montgomery. Whether she is writing novels or short stories, her work is always amazing. Even if you're not a short story lover, even if you think you hate short stories, I would suggest giving L.M. Montgomery a try.
© Becky Laney of Becky's Book Reviews
Posted by Becky at 9:52 AM

I'll bet these are fabulous stories. I LOVED Anne of Green Gables! Thanks for your review.

I have never read a book by Montgomery but I have the whole collection of Anne books. I must make time to read these as well, you make them sound excellent.

I am not a short story lover. But I loved these. LM did have a cast of eccentrics, and they stay with us, too.