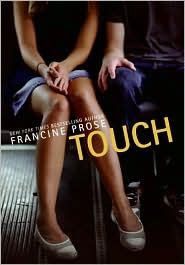 "Are the boys who assaulted you present in the courtroom?"

He said, he said, he said, she said...but who is telling the truth? Maisie Willard returns home from a year living with her mother and stepfather only to discover that her three best friends--Shakes, Chris, and Kevin--are no longer her best friends. It seems they are too weirded out by the new Maisie. You see, in the year she was away, she developed big breasts. And now her three best friends struggle to look at her face when they're together. Still, that doesn't quite explain what happened that day on the back of the bus.

What did happen? Well, that's for you to discover as Maisie's story slowly unfolds in Touch. One thing is clear, Maisie is unhappy and struggling to fit in. She doesn't like her new stepmother, Joan, but she doesn't like her new stepfather, Geoff, either. In fact, she really hates him. So what's a girl to do when she's not happy in either home? It would have helped some if she could have stayed friends with Chris, Kevin, and Shakes. They've only been best friends since they were preschoolers. Why can't they see her as the girl they've known all their life? Why can't they see her for who she is, not for her bra size?

I liked this one. I thought Maisie was well developed as a character. You could feel how uncomfortable, how awkward, how confused, how angry, how frustrated she was with everything in her life.

While I find the cover interesting, in a way, I don't see the girl on the cover as being very Maisie-like. Maisie is uncomfortable with her body--in some ways--and lives in t-shirts and jeans. Her stepmom, Joan, is always, always, always on her case about her clothes. About how she should dress better, etc.

© Becky Laney of Becky's Book Reviews
Posted by Becky at 8:34 AM

This sounds like an interesting read. Thanks for the review.

I agree that this sounds interesting. I'm going to add it to my to-read list.

Hey, would you please follow my blog? It's new and kinda scatter brained at the moment but I thought you might like it: http://theclumsyreader.blogspot.com/
If you could follow, that would be so great! :) Please? And I can promote you on my blog, and visa versa? Thanks! Love the blog! And I am so adding this book to the TBR pile ;)