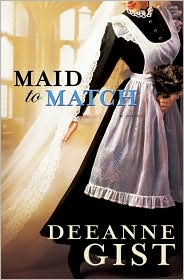 Like a butterfly breaking free from its confining cocoon, Tillie Reese emerged from the barren, tan-colored servants' hall into the opulence of Biltmore's main level. These predawn hours were her favorite. All was dark, no one stirred, and she had the entire floor--easily a half acre in size--all to herself.

Tillie, our heroine, has trained to be in service for most of her life. When the novel opens, she is head parlormaid. But there's a chance, a good chance, Tillie is about to be promoted to being a lady's maid.
Lady's maid to Mrs. Vanderbilt. The thought of it alone brings a smile to Tillie's face. This is what she's been hoping and praying for.

Next to housekeeper, the highest ranking position for a woman. The servant who had morning tea brought to her by the first housemaid while the second housemaid made up a fire in her room. The servant who was free to take a bath as often as she liked. Who traveled with Mrs. Vanderbilt. Who read books--books!--aloud to Mrs. Vanderbilt. Best of all, a lady's maid earned quite a bit more money, so she could help her family and others in the community who were in need. (13)

Of course, it's a job that will require some sacrifice on her part. No marriage. No children. No home of her own. But Tillie, for better or worse, hasn't met a man who could even slightly tempt her away from her dreams. No man who would make her feel that the job would require any sacrifice on her part. That is until she meets Mack Danvers.

Our hero, Mack, does not want to be in service. He does not want to be a useful man or a footman. (Though if he had to pick between the two, he'd pick being a useful man.) But he desperately needs to earn money. Why? Well, since his parents died, he's had to divide his brothers and sisters up. His sister, Ora Lou, is in an orphanage. And when he learns that she's being mistreated--that all the children are being mistreated--well, he's got to do something with that anger, that frustration. Working for the Vanderbilts, like his twin brother, Earl, will be the best way to make enough money to get his sister out of the orphanage. He never expected to meet someone like Tillie while he was there.

From the start Tillie and Mack are drawn to one another. Their chemistry is undeniable. Can Mack convince Tillie that a life with him would be better than a life in service?

© Becky Laney of Becky's Book Reviews
Posted by Becky at 11:34 AM

Definitely adding this one to the TBR, it looks very cute!

Oh, this has been on my TBR list! Thanks for the review... can't wait to get to it!

This sounds good. I've liked Deeanne Gist's other books, especially the books about Essie Spreckelmeyer. I am glad you hear that you loved Maid to Match. I will have to get this from the library sometime.

I haven't read any of Deeanne Gist's other novels but I am loving the sound of this one. Lovely review, Becky.

I am reading this book right now and i must say that it is truly breath taking. It keeps me on my toes and hook to ever word, driving me to find out what will happen next between Tillie and Mack. I truly recommend this book to everyone to read. It is a true love story.