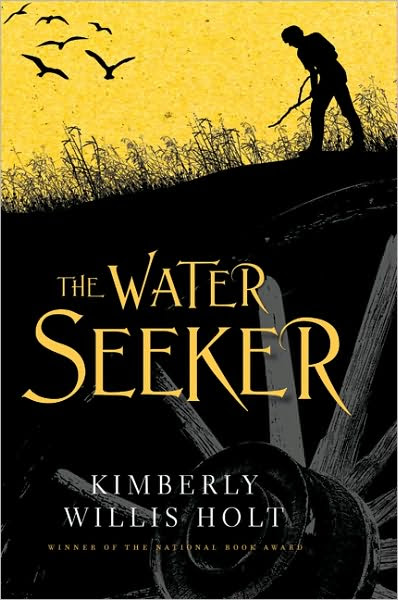 Jake Kincaid was known as the dowser. With a forked branch, he'd made his way from the Arkansas Territory to Missouri, stopping at farms to find waters for new wells. His plan was to raise enough money so he could do what he wanted and never pick up the branch again. But the dowsing was a gift. And a gift might be abandoned, but it will always be there, waiting to be claimed.

Is there an easy way to describe Kimberly Willis Holt's newest book The Water Seeker? I'll try my best to do it justice. Amos' father, Jake, is a trapper. One year Jake returned to discover that his wife has died, but that he has a son. Jake takes the infant and travels to see his brother (Gil) and sister-in-law (Rebecca). He leaves Amos there with the promise that he'll be back as often as he can. He's not completely turning over the care of his son, but he's a trapper and his life is a traveling life. Delilah, Amos' mother, had a great talent for drawing. Though he never knew his mother, he does have her gift. He also has a gift passed down from his father--the gift of dowsing. But he's embarrassed to let anyone know. After all, his father hates this gift. And would rather do anything but use it. But sometimes a man has no choice. He has to do things he hates in order to support his family.

One year Jake returns--and not alone--to learn that Rebecca has died and that Gil and Amos have moved in with a neighboring family. So Jake decides to take his son--then about six--with him. Jake has married an Indian woman, Blue Owl, and the three will be a real family and start a new life. But life is never that easy. They arrive at Jake's cabin and find that Daisy, Delilah's sister, and Homer, her husband, have been living there. Since Jake knows the family background, he can't knowingly send these two away. So the family expands. And keeps expanding--soon Amos has a cousin, Finn.

America is changing too. Its landscape. Its culture. Its "destiny." As much as Jake would love to keep trapping--that just isn't a possibility these days. So Jake decides to try his hand at scouting. He has been recruited to help lead a wagon west on the Oregon trail. The whole family--Jake, Blue Owl, Amos, Daisy, Homer, Finn--set out on a new adventure together. An exhausting, dangerous journey that will take them from Independence, Missouri, to Willamette Valley in Oregon.

The Water Seeker covers decades of American history, from the 1830s to the 1850s. When Amos begins his journey across America, he is about fourteen, his cousin, Finn, is six. So Amos grows up--in so many ways--during this difficult journey. He learns life lessons, has his first heartache, and learns what true love is all about.

The Water Seeker is a complex novel. The characters--and there are so many!--are all well-developed. I loved getting to know them all. There were so many people that loved Amos through the years, so many people who were part of his family--traditional or not. I loved meeting the different families on the wagon train. I loved the realism of it all. Heading west was not easy. It was dangerous. Bad things happened. They just did. One of the lessons Amos learns is that life may be hard, but it's good too. Some things make the journey worth it.

© Becky Laney of Becky's Book Reviews
Posted by Becky at 8:17 AM

This is one I had to return to the library because I had way too many checked out and couldn't get them all read :(
I will have to reserve it again - it sounds exactly like something I would enjoy.

Tina's Blog said...
This comment has been removed by the author.
8:27 AM