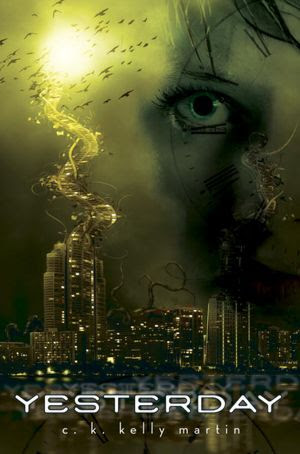 Yesterday has an interesting premise, but, it didn't quite work for me. In the prologue, readers meet a grieving and oh-so-angry Freya who has vowed to never forgive her father who "allowed" her brother with a deadly and oh-so-contagious disease to be taken away by authorities. Now she knows they are coming for her, though even she doesn't suspect the real reason why. In chapter one, readers meet a Freya who is newly arrived in Canada and about to start her first day of school. She's been raised in various countries, but, after her father's recent death, her family has decided to settle down. The Freya readers first meet is from 2063, the second from 1985. The first few chapters follow Freya through her first few weeks at school as she attends classes, makes friends, goes to a party, talks to a couple of guys. But things begin to change when Freya forces makes a connection with a guy named Garren. It would be just chance, their meeting, they are from different cities, different schools. But she sees him and knows that she knows him. That face, she knows. That face, she loves. He means something to her, if only she could think of a logical reason for having such a strong feeling. She follows him home. She thinks of him constantly. She decides to skip school so she can go to his house and talk with him. Without the prologue, readers might question Freya. But, of course, knowing that Freya doesn't belong in 1985, it's easier to believe that she's on the right track, that Garren is just like her, someone from the future who doesn't truly belong. Everything is a struggle for Freya, and soon everything is a struggle for Freya and Garren as these two team up to solve the mystery.

The book has an interesting premise: a future world that is in so much trouble that they've resorted to sending people back in time to save them. But the book is so didactic, so message-heavy. And the writing never felt quite right to me. Perhaps if the story had more mystery and the framework was different, it would have been a better read for me.

Labels: 2012, Books reviewed in 2012, Random House, review copy, YA Fiction, YA Mystery, YA realistic fiction, YA Romance, YA Science Fiction

I felt sort of interested until your last paragraph. I was actually reminded of City of Bones... and I convulsed. Grows.