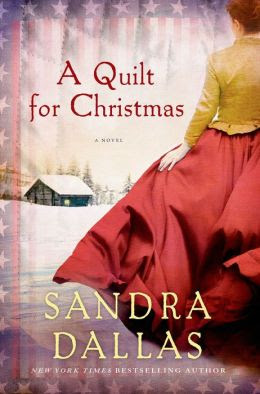 Eliza Spooner is the heroine. She loves, loves, loves to quilt. She loves to get together with other women in the community. The war has had an effect on the community. Many husbands (and brothers, fathers, sons, etc.) are gone, away fighting for one side or the other. Eliza's husband, Will, is fighting for the Union. The novel opens with Eliza finishing a quilt she's made for her husband. She'll be sending the quilt along with a soldier who is returning to her husband's unit from leave. Her love for her husband is obvious, and, not just because she's spent all this time making a quilt. There are dozens of flashbacks. These flashbacks give readers a chance to get to know the couple. However, I must admit that these flashbacks are confusing at times. They are not really set apart in the text, and the transition from present-day to the past can be sloppy at times.

Readers meet Eliza and her son and daughter. Readers meet men and women of the small community as well. Mainly, readers get to know Missouri Ann and her daughter. When Missouri Ann's husband dies, she takes the opportunity to flee from her abusive in-laws. Eliza opens her home to the pair, and this isn't without some risk. Missouri Ann's in-laws are probably without a doubt the meanest and cruelest in the county--if not the state. But not everyone in the community is as immediately open to including Missouri Ann in their group. Her in-laws have tainted her, a bit, no one wants to get close to someone who would marry into that family.

At one point, at a quilting party of sorts, the discussion of slavery and runaway slaves comes up. Opinions are mixed. Prejudices are voiced. Even though most of the women are for the Union--for the Yankees--most if not all have very strong views about blacks.

Eliza's own views will be tested when she's asked to hide a runaway slave: a woman who murdered her mistress. Will she welcome her home to this slave and put her own life and the lives of her children at risk?

A Quilt for Christmas is an odd book at times. It seems to have a handful of plots and stories, any one could be the MAIN one, but really not one seems to stand out as being the one it's all about. It's definitely NOT a plot-driven book. It's mainly about the lives of women in a particular community during the fall of 1864 and throughout 1865.