The Golden Dreydl is an interesting Chanukah themed fantasy novel for children. There is an album that goes along with it. The book and album put a Jewish twist on the Nutcracker story.

Sara, the heroine, of The Golden Dreydl has quite the bad attitude about "having" to celebrate Chanukah and "not getting to" celebrate Christmas like all her friends. But to the family gathering she will go--no matter the fuss. (Sara has an older brother, Seth). 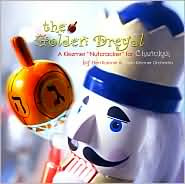 Readers briefly meet Sara, Seth, and their many, many cousins. The "kids" of the family are playing dreydl. Sara is still in a mood. A mood that isn't exactly improved when Tante Miriam shows up with presents for one and all. It's not her fault, mind you, Sara even seems a little inclined to like her present: a golden dreydl. But Seth and her get into a bit of a fight. The dreydl ends up flying through the air and hitting the TV and breaking it. That puts most everyone in a mood.

Readers next join Sara later that evening, for a fantasy adventure. She follows a young girl--a girl claiming to be the Golden Dreydl--through the hole in the TV, I believe. They arrive in a fantasy land, of sorts, with demons, peacocks, a fool, and King Solomon and the Queen of Sheba. There is also much talk of a Tree of Life.

Sara is given a quest, of sorts, to save the girl from the demons/demon king. She has the Fool to help her. A few riddle games are played. First, between Sara and the Fool, and, then later between the Demon King and Sara and the Fool.

For those readers who enjoy fantasy novels, going to different worlds, doing quests, this one is enjoyable enough. If you get a chance to listen to the music, it will probably help you 'enjoy' it even more.