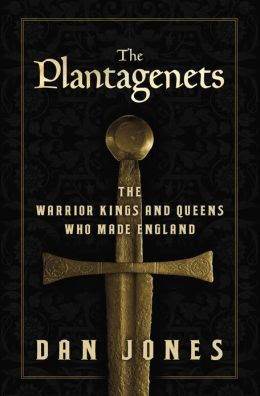 I enjoyed reading this overview of British history. The book examines the reigns of a handful of Plantagenet kings: Henry II, Richard I, John, Henry III, Edward I, Edward II, Edward III, and Richard II. It spans several centuries: 1120-1399. It also overlaps a bit with French history.

The book opens with "The White Ship." It's a dramatic way to start a book. Henry I, the son of William the Conqueror, loses his son and heir in a shipwreck. Henry I has two dozen illegitimate children--give or take one or two. But his only legitimate child is a daughter, Matilda. He remarries hoping presumably to have another child--a son, a new heir. But that is not to be. He marries the widowed Matilda off--it was anything but a love match--and she starts having children of her own, many of them sons. He leaves his kingdom to his daughter, supposedly everyone has sworn their allegiance to her, but, in reality, she's never in a position to reign as queen. Her cousin, Stephen, reigns instead. War follows, naturally. It is not a short war, a quick and decisive war. It is a here and there, on-and-off again war where the people suffer for the family squabble most. Eventually, an agreement of sorts is reached, Stephen will pass the crown to Matilda's son, Henry II. He is the first Plantagenet king. Henry II, if you remember, is married to Eleanor of Aquitaine, the former French queen as well. They have many children together...

As for the details about each king, what can I say? It's an overview, a detailed overview, to be sure. Some readers may be more of an expert and find fault with statements here and there throughout the book. They may spot myths presented as fact. But I certainly can't be among them. I don't know enough about each and every king.

I bought this book but haven't read it yet--and then heard Dan Jones speak at an author event at our library and bought his next book too- The Wars of the Roses. They both sound really good, so I should get reading!

Becky, have you read Costain's series of four books on the history of medieval England, beginning with The Conquering Family. I highly recommend them if you have not.

This looks like a good way to get farther back in history. We were mostly interested in the Scientific and Industrial Revolutions in England, so I started about 1600.