My Year with Jane: A Darcy Christmas 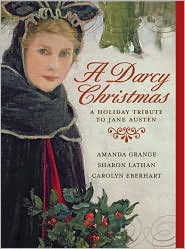 Mr. Darcy's Christmas Carol is an interesting and often entertaining read starring Austen's characters and borrowing much from Charles Dickens. The premise is simple yet not completely predictable. Mr. Darcy is oh-so-happy that Bingley and Jane have married. But. He's still alone this holiday season. Unlike the original, he did not propose marriage to Elizabeth soon after Bingley and Jane's happy announcement. Georgiana, his sister, wants a new sister, a new particular sister for Christmas. His cousin has made a similar request, a particular new cousin. It isn't that Darcy doesn't still love her, want her, need her. But he's a bit proud and stubborn. So on the Christmas Eve in question, Darcy is visited by the ghost of his father who warns him of his faults and promises the visits of three spirits in the night. He adds that they will come with familiar faces. (Can you guess which "familiar face" is the ghost of Christmas future?)

I have conflicting thoughts on Mr. Darcy's Christmas Carol. On the one hand, there would be scenes and passages where I'm: it works, it really works, I can't believe this is working!!! And then perhaps just a page later, I'm: I take it back, this doesn't work at all, how am I suppose to believe this?! So there were plenty of scenes I liked. I liked how she fit it all together and made it work at least some of the time. It would be hard to fit all the great bits of Pride and Prejudice with all the great bits of A Christmas Carol. So I'm surprised it worked as well as it did actually. I like how one of my favorite scenes of A Christmas Carol is reworked from the beginning to the near-ending. That was something! I don't LOVE this one necessarily. As I mentioned, there are places where it is an almost-but-not-quite. It was a fun idea, perhaps, but not absolutely flawless. I alternated between wanting to shout at the book, and cheering. Still, it's worth reading at least once.

What did I think of Amanda Grange's Christmas Present? I liked it very much!!! I tend to like or love Amanda Grange's Austen adaptations. I think she does a great job with keeping Austen's characters as we know them and love them. She is able to capture the essence of each character. In this novella, readers get a glimpse of their second Christmases. (I believe, the two couples married in November or possibly early December?) Bingley and Jane have a baby. Elizabeth and Darcy are oh-so-close to having a baby as well. But have-her-own-way Elizabeth is insistent that even though she is due to have a baby any day, she is perfectly capable of traveling a few hours by carriage so she can spend the holidays with her family. Darcy gives in, of course. So what does a family Christmas look like? Well, this family Christmas borders on insane! Through half-a-dozen coincidences it seems, that most of the family (minus Georgiana) are brought together to share these few days. Including some you might not be expecting to see: Lady Catherine. Mr. Collins. The novella is comical. It's just a satisfying way to spend an afternoon. Sometimes a good, quick read that is light-hearted fun is just what you need.

This is my final post for "My Year With Jane." Here's a look at all the posts about Jane Austen:
© 2014 Becky Laney of Becky's Book Reviews
Posted by Becky at 7:30 AM