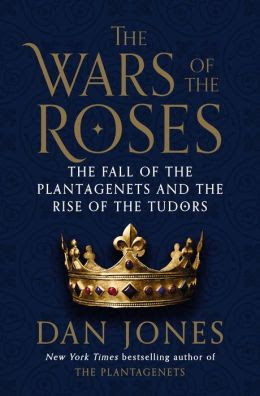 The Wars of the Roses: The Fall of the Plantagenets and the Rise of the Tudors. Dan Jones. 2014. Viking Adult. 416 pages. [Source: Library]

The Wars of the Roses: The Fall of the Plantagenets and the Rise of the Tudors was originally published as The Hollow Crown in the UK. It focuses on the lives of Henry V, Henry VI, Edward IV, Richard III, Henry VII, and Henry VIII. Others come into it as well: men and women who had a role to play in the "Wars of the Roses." I can imagine that if you're completely new to the subject, there would be a lot of names to keep up with, a lot of connections to remember. I didn't find that to be the case, however. I found the story was clearly told, with plenty of detail. It is an engaging read. It can lead you to plenty of "what ifs..." Because the story of how Henry VII came to the throne is just like that. He wasn't a likely candidate, in other words. If there hadn't been decades of distrust and betrayals and executions and battles, he'd never have stood a chance.

The book has plenty of drama, and I'd say it does a good job bringing the subjects to life or revealing their character or personality. I think the book makes an effort to quote what contemporary records had to say about any given king, what reputation they had during their reign and directly afterwards.

I would say that both The Plantagenets and The Wars of the Roses are great at illustrating that all the kings had weaknesses. There was never one completely perfect king. Some kings had more strengths than weaknesses. Some kings had more weaknesses than strengths. Some kings came to reign at exactly the right time when their country needed their strengths and could overlook their weaknesses. Some kings came to reign and didn't have what the country needed--at least not at that time. The books are also a great reminder of how DIFFERENT things were in the past, of how BLOODY and CRUEL politics could be. It wasn't just one king here and there that proved execution-happy or power-hungry, and, it wasn't just English kings either. If you put the times into context, you'll see that's just how things were all over Europe, and probably even broader than that.

For some potential readers, there's only ONE question: Does Dan Jones say that Richard III killed his nephews?! This is what the book says exactly, "All we can be sure of is that the boys were first disinherited, then deprived of their liberty and servants, and that they then disappeared, presumed dead by contemporaries across Europe. And the person who benefited most from their disappearance was Richard III" (278). That is all the book says about WHO might have done it. It does not suggest others who may have had motive and opportunity. But he doesn't spend time elaborating--speculating--on how, when, where, and why Richard did it. That was a big relief to me. Yes, I would have preferred for him to mention OTHER possible murderers, to be completely fair. BUT at least he didn't spend pages and pages building up a case against Richard murdering his nephews in the tower. Those two sentences are it. That is all the time he spends on the subject. So I think it would be overreacting to reject the whole book based on two sentences. The book covers decades of material. It covers the reigns of SIX kings. You can doubt his conclusion, and still benefit from the book as a whole.