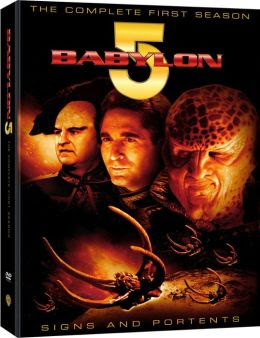 The second disc has four episodes:
Compared to the first four episodes, these four episodes are so much better, so much stronger. It was watching the fifth episode that convinced me that, yes, I need to watch the series. The "trial" period was over. What convinced me? Well, I'm not so sure it wasn't G'Kar singing "So Many Fishies"!!!

The Parliament of Dreams:
Premise/plot: There are three main stories to this episode. One, an assassin has been hired to kill G'Kar. Two, Sinclair's ex-girlfriend, Catherine, arrives on the station. Will they reunite? Three, there is a weeklong festival celebrating every alien species' "dominant" religion. So viewers learn more about various cultures on the show Centauri, Minbari, etc. Usually, the shows have multiple stories per episodes, and I end up liking some more than others. In some cases, I may hate one story, and love the other. So there's always a reason to watch. This is a strong episode. I love so many things about it. It does introduce three new characters to the show. (Na'Toth, G'Kar's aide, Lennier, Delenn's aide, and Catherine, Sinclair's true love. Of the three, I love, love, LOVE Lennier.)
Pay Attention To: Minbari "rebirth" ceremony
Favorite Quotes:


Delenn to Lennier "I can't have an aid who will not look up. You will be forever walking into things!"

Delenn: "Will you follow me into fire, into storm, into darkness, into death? And the Nine said Yes. Then do this in testimony to the one who will follow, who will bring death couched in the promise of new life and renewal disguised as defeat. From birth through death and renewal, you most put aside old things, old fears, old lives. This is your death, the death of flesh, the death of pain, the death of yesterday. Taste of it, and be not afraid. For I am with you until the end of time. Taste of it. And so, it begins"

Mind War
Premise/Plot: There are two main stories in this episode. The first involving telepaths and psi-corps. The second involving Catherine and G'Kar. I love, love, LOVE the second part. Why? G'Kar may not have come across as likeable or lovable on the first disc. But in Parliament of Dreams and Mind War, his charm is too strong to be resisted. He does seem to get the best lines!!! What I did love about the first story, however, is the introduction of Alfred Bester (played by Walter Koenig!!!). We'll be seeing him, but NOT his assistant, again!
Pay Attention To: G'Kar!
Favorite Quotes:


Bester: It was a calculated risk!
Susan Ivanova: Good old Psi Corps. You guys never cease to amaze me. All the moral fiber of Jack the Ripper! What do you do in your spare time, juggle babies over a fire pit? Oops, there goes another calculated risk!
Psi Cop Kelsey: You're not helping the situation.
Ivanova: Lady, you are the situation!

G'Kar: Let me pass on to you the one thing I've learned about this place. No one here is exactly what he appears. Not Mollari, not Delenn, not Sinclair, and not me.

G'Kar: "There are things in the universe billions of years older than either of our races. They are vast, timeless, and if they are aware of us at all, it is as little more than ants, and we have as much chance of communicated with them as an ant has with us. We know, we've tried. And we've learned that you can either stay out from under the foot, or be stepped on."
Catherine Sakai: "That's it? That's all you know?"
G'Kar: "Yes, they are a mystery. And I am both terrified and reassured to know that there are still wonders in the universe, that we have not yet explained everything. Whatever they are, Ms. Sakai, they walk near sigma 957, and they must walk there alone."

The War Prayer
Premise/Plot: Two stories. First. Young Centauri couple wanting to marry, seek help and/or pemission from an unlikely source. Second. Readers are introduced to the Homeguard group--a racist, pro-Earth, anti-alien terrorist group that is ever-gaining popularity on Earth. Homeguard is attacking aliens on the Babylon 5 station.
Pay Attention To: Londo. He has some *great* quotes in this one. Also, did you notice that Danica McKellar played the young Centauri runaway?! Also, we get a hint that Susan has had bad luck in her love life.
Favorite Quotes:

And The Sky Full of Stars
Premise/Plot: Sinclair is kidnapped. Why? Someone wants to find clues within his mind to explain why the Minbari surrendered when they were winning the war. Does his subconscious hold the answers? This episode really only has the one story.
Pay Attention To: Delenn and Sinclair
Favorite Quotes:

Ivanova: "Mister Garibaldi, there're days I'm very glad I don't have to think like you do."