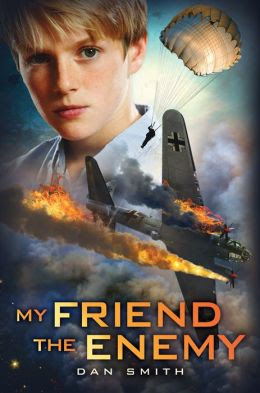 I really enjoyed reading Dan Smith's My Friend the Enemy. Give me a book set during this time period--World War II--and I'll most likely be eager to read it. This one happens to be set in England during the war! (It being set in England is an added bonus for me! Two reasons for me to be excited to pick it up!) I found My Friend the Enemy to be a quick read, and a compelling one. The premise is simple enough. Two twelve-year-olds, Peter and Kim, find a 'souvenir' in the woods after a German plane crashes near their village.

These two have just met. Kim isn't like any other girl he's known before. She dresses and acts differently. There is something about her that he's drawn to. I think they bring out the best in each other, in some ways, and I think together they are more likely to get into trouble! Kim is new to the community/village. Her parents wanted her to be safer, and they have sent her to live with an aunt. But she's seen more than Peter, perhaps, when it comes to the effect of the war. Her brother is a soldier. His father is a soldier. These two can relate well to one another. So. Back to the souvenir. These two break curfew and risk everyone's wrath by going where they technically have no business going at all. They go first to the scene of the crash, crawl into the plane itself, and then go exploring in the surrounding woods. What they find in the woods that night changes everything. For they find a near-dying German soldier, one of the plane's crew. He is--in German, of course--pleading for help, begging for mercy.

Before, if you'd asked either one, they most likely would have said Germans are the enemy, show no mercy, they're evil, they're killing monsters. But things change when they have 'the enemy' right in front of their eyes. He is young. He looks to be a teenager. To Kim's eyes, she's seeing someone just like her brother. He is not only young, but he's also weak and helpless. He is obviously in pain and very scared. They decide the right thing to do is to show him mercy, to treat him as they would want others--strangers--to treat his dad and her brother if their positions were reversed. They choose kindness. They give him water. They take him to a hiding place. They give him food and a blanket. Not right away, of course. They weren't walking around carrying provisions or anything. What they both struggle with in the next few days/weeks is keeping the secret. Is it right what they've done? They don't feel it is wrong to be merciful, of course, but is it wrong to lie and steal to cover up everything? They struggle with the ethics of it. In their minds, they see it as being a choice between life and death. They feel certain that soldiers would kill him, show no mercy or grace. (They are assuming this, of course. And adult readers might question their assumption.) But great risk and sacrifice is involved in keeping that secret, and it doesn't get any easier at all. It sounded good and right initially, but, what if the war lasts years?! How are they really going to pull this off? What will happen to Erik, the soldier? What will happen to them?! What is best for everyone?

Readers get to know Peter and Kim very well. And, to some extent, readers get to know Erik as well. Though perhaps limited since Kim and Peter don't speak much German, and Erik doesn't speak much English. Readers spend more time with Peter and his mother than with Kim and her aunt. Readers also get acquainted with the community, meeting various people. It has just enough detail to establish the setting. It isn't weighed down tediously by description. The plot moves quickly, and there is plenty of action.

I loved this one.


All those Germans we heard about on the wireless were different. They were not men, they were faceless, helmeted and armed, marching across places I knew the names of but had never seen. France, Norway, Africa. They were airplanes dogfighting over the English channel; they were bombers casting a shadow over our cities. They were the enemy. Our German was different. He was a real person. He was here, he had a face, and he was in trouble. (121)

This does really look good!

Becky, this sounds like a touching WWII story. I'm glad you enjoyed My Friend the Enemy.

Becky, What a lovely review of this story. It has all the elements I love in a story, too. Do you know The Book Thief, by any chance. Rudy finds a downed Allied pilot he can't save, but chooses mercy, as well.

This sounds like one I would enjoy -- World War II and England are a great combination for me, too.