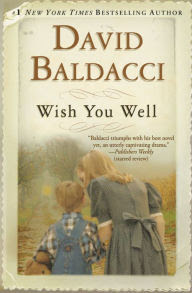 I enjoyed reading David Baldacci's Wish You Well. That is, I "enjoyed" it as much as one can enjoy a book with so much heartache in it. Some of the heartache was completely predictable, I won't lie. But some of it wasn't.

Readers meet Lou (Louisa) and Oz (Oscar). These two undergo a lot in the course of a year. The family is in a car crash. Their father dies at the scene. Their mother is left in a coma, of sorts. She's able to eat and drink, but, not to talk or walk. She's essentially dead to the world, unable to give any sign to anyone that she is still in there. The two go to live with a great-grandmother in Virginia. This great-grandmother raised their father. Her name is Louisa. Life in the country is certainly different than life in New York City, but the two adjust quickly. They enjoy spending time with Diamond, an orphan boy around their age, and Eugene, a black man who lives and works with them on the farm. Their mother lives with them as well. They manage to nurse her and do all the farm work as well. One man, a young lawyer, takes it upon himself to visit the family often. Cotton reads to Alicia (the mother) as often as he can. The children quickly bond with him. So they've experienced loss certainly, but, they've made new friends as well.

Is life perfect? Not really. Oz and Lou would give anything to have their parents back. And Oz especially is still counting on his mom waking up again. Lou secretly wants this just as badly. But she's older, and "wiser," and doesn't want anyone to know that she believes in wishes and happy endings. She can't help herself for wanting and wishing, but, she's ashamed of it at the same time. She hates herself for it in a way.

The book chronicles their adventures and misadventures in the country. The setting is 1940, by the way. I won't spoil the book; yes, a few things are predictable. But not everything in my opinion.

Wish You Well is a coming-of-age story written for adults. Don't be confused by the child narrator, this one really is an adult book.

What I liked best was the characterization and the setting. I liked Lou and Oz and Diamond. I liked Louisa and Cotton. I liked spending time with them. And the historical setting was a nice touch.