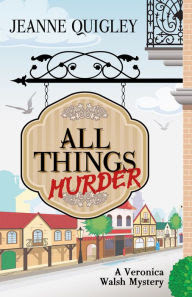 
Did I enjoy Jeanne Quigley's All Things Murder? Yes, for the most part!

Veronica Walsh is the heroine and amateur-detective in All Things Murder. Before Walsh lost her job--on a soap opera, the soap was CANCELED and replaced with a talk show about FOOD--she was happy and successful and doing exactly what she wanted. Life was GOOD. Everything was just-right. True, she never found 'true love' and married. But her character had SIX HUSBANDS. So she never really felt she was missing out all that much. Between her character, Rachel, and herself, she'd pretty much experienced all that life has to offer--good and bad. But she begins to feel lost AND OLD within a few weeks of being out of work. So she heads to her hometown, and considers restarting her life there.

What she finds is that she did NOT leave the drama behind. For soon after her arrival in town, her next-door neighbor is murdered. And she is the one who finds the body. She didn't know her well, but, just in the few days before her neighbor's murder (Anna is the victim's name), Veronica witnessed PLENTY of drama. Without anyone spilling anymore gossip, Veronica already has a handful of suspects: people with motive and/or opportunity to have killed Anna...

Like many cozy mysteries, this one mixes in a little bit of romance. (The romance didn't overshadow the mystery, in my opinion.)

I like this one. It is a light read, not that heavy or complex. It was fun too. I liked meeting all the people who lived in the town. Some characters were quite interesting, and, I'd like to see more of them in the future.

Overall, I liked this one. If the second one was available, I'd want to read it!