The Nutcracker Comes To America (2015) 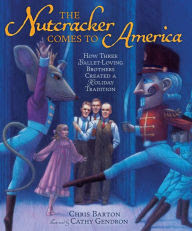 I loved The Nutcracker Comes to America. I did. True, I don't think it comes as a big, big surprise to anyone who knows how much I love, love, love The Nutcracker. But still, I loved it.

This nonfiction picture book focuses on three dancing brothers--William (Willam), Harold, and Lew Christensen. Not all three brothers were born loving to dance even though it was the family business, but, they all learned to love dancing and excelled at it. In fact, two of the brothers left their hometown and sought to become professional dancers, first doing Vaudeville and then later New York. The book focuses not just on dancing, but on the lives of the brothers, on their careers, their contributions to the dance world. Notably, their contribution was in popularizing THE NUTCRACKER ballet into a holiday tradition or sensation.

In 1934, one of the brother's has his ballet students perform a few selections from The Nutcracker. Ten years later, 1944, sees the FIRST full-length American production of The Nutcracker. (Note: Fantasia, a Disney film released in 1940, had used several songs from the Nutcracker. So perhaps a few people would have first heard these songs from watching that movie.) This first production is in San Francisco where two of the brothers, I believe, are working. Two more productions follow: one in 1949 and one in 1951. Many different productions began to follow in the 1950s, including, notably, Balanchine's New York City production in 1954. Also of note, to me at least, is that there was a live television broadcast of THE NUTCRACKER in 1957.

It includes plenty of details on the Christensen brothers, on ballet, and specifically on The Nutcracker. The story is worth sharing. This picture book is a great example of why nonfiction picture books can be SO GOOD AND SATISFYING.

I loved, loved, loved the illustrations by Cathy Gendron. They were just-right and complemented the text perfectly. I loved the end papers too! I loved everything about this one!!!