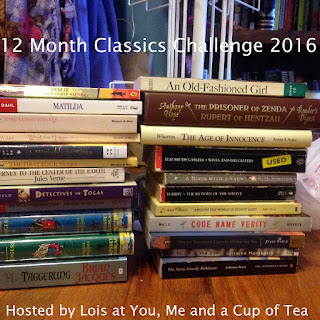 
January- A classic you've always wanted to read- Start the year off with a bang!
February- A classic you've always dreaded reading- Get that book out of the way... and who knows! You may end up loving it!
March- A classic you've been recommended- We all have those
April- A classic you've seen the movie/miniseries/TV show of- If you're like me you've probably seen quite a few film versions before being able to read the book. It's time for that book to get read!
May- An American classic
June- A British classic
July- A European classic (non-British)
August- A modern classic- Up to your interpretation
September- A children's classic
October- A classic by a female author
November- A classic by a male author
December- A classic written under a pseudonym- If you don't know which books were written under pseudonyms here's a few names to help you out. Jane Austen wrote her books under a pseudonym (by a lady) as did the Bronte sisters (published their books under male pseudonyms), George Elliot (real name Mary Ann Evans) and Agatha Christie also wrote a few books under the Pseudonym Mary Westmacott.  Men who also have written under Pseudonyms are Mark Twain (real name Samuel L. Clemens) and Lewis Carroll (real name Charles Lutwidge Dodgson). I'm sure there's more out there but there's a few to start you out.

What I Plan To Read:

January -- Orley Farm by Anthony Trollope
February --  Hunchback of Notre Dame by Victor Hugo OR East of Eden by John Steinbeck OR Quo Vadis by Henryk Sienkiewicz OR Ben Hur by Lewis Wallace
March --East of Eden by John Steinbeck OR Alas, Babylon by Pat Frank OR Don Quixote by Miguel de Cervantes
April -- Old Curiosity Shop by Charles Dickens OR Wives and Daughters by Elizabeth Gaskell
May -- East of Eden by John Steinbeck OR something by Pearl Buck or Mark Twain
June -- Lord of the Rings by J.R.R. Tolkien OR Once and Future King by T.H. White
July -- Les Miserables by Victor Hugo OR Doctor Zhivago by Boris Leonidovich Pasternak OR The Decameron by Giovanni Boccaccio OR Don Quixote by Miguel de Cervantes OR The Diary of a Young Girl by Anne Frank
August -- The Sunne in Splendour by Sharon Kay Penman OR ???
September -- something by Edward Eager, or, a Newbery award winner pre-1966
October -- something by Margaret Oliphant or Elizabeth Gaskell
November --something by Anthony Trollope, Charles Dickens, Wilkie Collins,
December --something by one of the Bronte sisters or possibly George Eliot

What I Actually Did Read:

I really enjoyed the abridged version of Don Quixote (March), and I somehow made it through The Mill on the Floss by George Eliot (December). I liked a few parts of The Mill on the Floss, but overall it just seemed really long. :)
Good luck! This sounds like a fun undertaking.

Thanks for joining up! It looks like you have some fun books for possibilities. I personally love Wives and Daughters. :)

You have an excellent list! I signed up for the challenge too and you have some great ideas I didn't think of! I actually just got Sunne in Splendour by Sharon Kay Penman from the library, never thought of that as a classic!