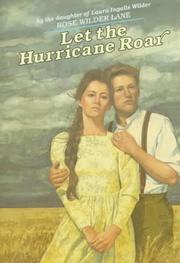 After reading Pioneer Girl by Laura Ingalls Wilder earlier this year, I was curious to read Rose Wilder Lane's Let the Hurricane Roar. If memory serves me, Rose Wilder Lane borrowed freely from her mother in terms of character and plot. That is while she was reading and editing and preparing her mother's manuscript to be sent off for possible publication, she was beginning to write her own pioneer-inspired novels, one of which is Let the Hurricane Roar. It has been a good six months or so since I read Pioneer Girl, so I don't remember the details clearly. This mother-and-daughter team were definitely writing at the same time about the same things, though I suppose for different audiences. Little House in the Big Woods was published in 1932, I believe, and Let the Hurricane Roar was published in 1933.

Let The Hurricane Roar is a historical fiction with a touch of romance. One could possibly say that it "celebrates" the pioneer spirit, but, it doesn't so much celebrate it and honor it as it does present it realistically. Life was hard, tough, at times seeming bleak and hopeless. The only thing abounding was often pride, stubbornness, gumption, if you will, and diligence. In short supply? Money and neighbors and life's luxuries.

Molly and David are the main characters of the novel. These two head out west, and it isn't long before Molly finds herself with child. Fearing to leave their new claim unsettled, she becomes enthusiastic about going with him to the claim and having the child all by herself. Who needs neighbors, friends, family, a midwife or a doctor? Molly proves to be just as proud and stubborn and spirited as her husband. (David DOES play the fiddle. And the two do endure several blizzards.)

To sum it all up, the book is more an account of horrible things happening to them within the first two or three years of settling their claim than anything else. That's not to say that the book lacks characterization. But it does lack characters, in some ways, since Molly and David are essentially on their own. Swedish neighbors, I believe, appear midway through and then depart again. And Molly does visit the nearest town in one or two chapters. But essentially it's just the three of them! (The baby doesn't do much if I'm honest.)

I liked it okay. It wasn't a great book that I simply loved and delighted in. But it was a solidly good read for anyone interested in pioneers.

I have one copy under this title and one under Young Pioneers in my library. Have to get those checked out today!

It has been a while since I read this, but I remember being amazed by what they took as normal that these days we'd call a severe hardship.