My Thoughts on Ever After 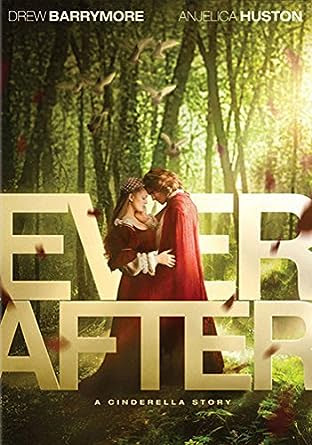 I had forgotten how much I adored Ever After until I recently rewatched it. I've been meaning to rewatch it since watching the newest Cinderella. I couldn't quite make up my mind which might be my favorite Cinderella retelling. I'm not sure I've made up my mind completely, but, I think I'm leaning towards Ever After.

Danielle is the heroine of Ever After. This Cinderella retelling is set around the time of Leonardo da Vinci--he is actually a character in the film--which would mean the movie is apparently set in either the late 15th century or the early 16th century. But this is not meant to be a historically accurate film necessarily. Don't expect the 'royal' family depicted in the movie to match up with any actual royal family from Europe!!!

I loved Danielle. I did. I loved the way she spoke, the way she carried herself, the way she laughed and smiled. She loved to read. And she was a thoughtful, considerate, compassionate person. I enjoyed her friendship with Gustave and Leonardo da Vinci. And, of course, I loved to see the developing relationship between her and Prince Henry. Overall,  I thought she was a lovely Cinderella.

Marguerite and Jacqueline were the stepsisters of Danielle. Marguerite is decidedly a wicked stepsister! Her cruelty and selfishness make her so. She was not particularly an 'ugly' stepsister--on the outside--but her vanity and selfishness make for an ugly character all the same. Jacqueline is a character that I quite enjoyed, her "wickedness" does not come as naturally perhaps. She has to be coached and reminded to be cruel and rude to Danielle. And her reformation was a delight.

Rodmilla was the stepmother's name. (She was played by Anjelica Huston.) She was appropriately wicked and heartless. Perhaps even more so than the animated 'Wicked Stepmother' of Disney fame. I'm thinking in particular of what happens after the big reveal at the ball. And how she got all the 'nice things' back in her home so she could make a good impression on the Prince. Was enough justice done in the end? Perhaps, perhaps not.

Prince Henry. I adored him. Of course it's not hard to like him say more than the animated Prince Charming who has no lines of dialogue. Still, I decidedly liked him...for the most part. Most of his scenes with Danielle were just wonderful--very cute, sweet, charming, romantic. Not all of his scenes, perhaps, because he could be a bit stubborn and foolish and blind. I am thinking of his reaction to the 'big reveal.' But he made me smile and laugh most of the time. The scene, for example, where he's at the altar with the Spanish bride and she's sobbing and hysterical. Overall, he is a big reason why this is such a giddy-making film.

The writing and the story. I thought it was very quotable.

Their first meeting in a field:


Danielle: Forgive me, Your Highness, I did not see you.
Henry: Your aim would suggest otherwise.


Henry: Hello.
Danielle: Hello.
[pause]
Danielle: What are you doing here?
Henry: [sheepishly] I uh... I came to... rescue you.
Danielle: Rescue me? A commoner?
[starts to walk away]
Henry: [going after her] Actually, I came to beg your forgiveness. I offered you the world and at the first test of honor, I betrayed your trust. Please, Danielle...
Danielle: [stops, turns around] Say it again.
Henry: I'm sorry.
Danielle: No.
[smiles]
Danielle: The part where you said my name.
Henry: [smiling] Danielle.


My great-great-grandmother's portrait hung in the university up until the Revolution. By then, the truth of their romance had been reduced to a simple fairy tale. And, while Cinderella and her prince *did* live happily ever after, the point, gentlemen, is that they lived.

Nice review! I enjoyed this stroll down memory lane. I loved this movie and it has been years since I watched it. I did like the recent Cinderella remake but I also like Danielle more. The new Cinderella was a little too saccharine sweet and had less personality than Danielle did.

My mother introduced this movie to me back when we still had a functioning VCR machine. So back before I was a teenager. By far this has been my favourite retelling of Cinderella because it was so realistic and it didn't need magic in order to have it all come together in the end. It's so neat to see someone else's view on the film (other than my own or my mother's).

Lovely review - this is definitely one of the most quotable films out there :)