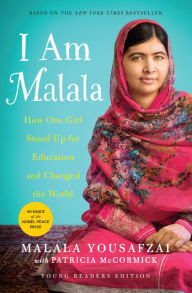 I wish I had known there were essentially two different books called 'I Am Malala.' I read, by mistake, the one adapted for young readers. I would have preferred to read the one written for adults. Not because I have a huge problem with adult nonfiction books being adapted for younger readers, I've never really given it any thought before. I don't have strong feelings one way or the other. But because I'm probably only going to read one, and, I'd want as full a story as possible. Now, I'm curious: how are the two different, and, what was left out of the younger reader's edition. But am I curious enough to seek out the other book and read the same story twice?! See. I'm torn now. I don't think I will...at least not now. But perhaps in a year or two, we'll see. (Has this ever happened to you, what did you decide?!)

So. This one is a biography of Malala Yousafzai. She is a believer in education for girls and women. Her outspokenness, her bravery angered the Taliban in Pakistan. Threats were made on her life, on her father's life. Eventually she was shot in the face on the school bus one afternoon. The book covers several years before the incident. One gets a sense of what life was like in Pakistan at that time--around 2008 or 2009, I believe, is when it opens. One especially gets a sense of what life was like in her household. Her father started several schools for girls; and he believed his daughter should have every opportunity to learn, to study, to be free to be herself. He supported--if not encouraged--her daughter to find her voice, and, to speak up for what she felt was right. Together they decided that it was worth the risk to their own lives.

Education is important. Girls need the chance, the opportunity for education just as much as boys do. An eleven or twelve year old girl should have the opportunity to go to school instead of being married off if her family arranges it. There should be more than one way to raise a girl, more than one option of how her life could go.

Malala is an advocate for education, for girls' education. Her message to the world did not stop after the Taliban shot her. In fact, if anything it magnified--amplified it. Her international audience grew much, much larger. Now everyone knew her, knew her story, knew what she stood for. There would be no stopping her now.

What I enjoyed about this book was how real it was. It could have easily been an issue book from start to finish. A book so passionately driven by one cause--one message--that it almost drowns in it. But that wasn't the case with this one. The way her story was told was very grounded in reality, very humble. This is one girl's story. And, yes, in some ways she is extraordinary. But in other ways she's ordinary too. The way that she describes her family life, the way that she describes having friends, it just felt very down-to-earth and genuine.

I would recommend this one. But as I said I wish I had known that there were two books to choose from. If you've read the adult one and the young adult one, did you notice any differences? Were the differences big?

My school was a heaven. Because inside the Khushal School, we flew on wings of knowledge. In a country where women aren't allowed out in public without a man, we girls traveled far and wide inside the pages of our books. In a land where many women can't read the prices in the markets, we did multiplication. In a place where, as soon as we were teenagers, we'd have to cover our heads and hide ourselves from the boys who'd been our childhood playmates, we ran as free as the wind. We didn't know where our education would take us. All we wanted was a chance to learn in peace. (34)

I had no idea there were two versions of this. I would read the adult version preferably because I would want the whole story, but I am not sure I would want to read the same story twice if I read the younger version first... Maybe if it was something I loved?