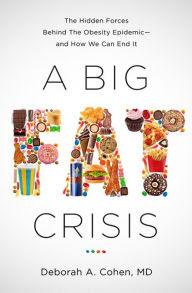 I found Deborah A. Cohen's A Big Fat Crisis to be a compelling read. Did I agree with the book? Well, that's another story. First, I want to say that her approach is different from those I've read before, read recently I mean. Her approach is more psychological perhaps.

Cohen basically tries to persuade readers of two things: 1) that people who are obese are victims and they cannot possibly be held responsible for what they consume or how much they consume 2) that people who are obese are obese because of their surrounding environments and that if the environments changed, then, their behavior would most likely change as well as they adapt to a new normal.

Let's look at these individually first.

People are obese because they naturally lack the will power to say no to food that is easily, consistently available; people are obese because of an inability to think things through and make good-for-them-in-the-long-run decisions. Her argument is essentially that people fall victim to their environment, and, they physically--psychologically--can't help succumbing to cues from their environment. People aren't smart enough to 'see through' or 'see beyond' the obvious tricks of the food industry. They are fooled one hundred percent of the time, at least, that is what Cohen argues. She dismisses the third of Americans that are not overweight or obese as almost abnormal, inexplicable phenomenons. (Because their existence disturbs her findings about what is natural for humans, they're largely ignored or dismissed. What could she possibly learn from people who have self-control, when, clearly she argues for hundreds of pages that self-control isn't natural and can't be taught?!)

Let's slow it down. Is this true? Do we want this to be true really? Do we really want to argue that no one is ever responsible for their behavior, and, that they are just following the cues of their environment, and they don't have any other choice but to do what they're led to do? Think about what this argument means for all areas of life where decision making is involved--which is essentially everything.

I don't think this is true. This "excuse" may temporarily give you a "feel good" feeling if you're overweight or obese, but, isn't it also slightly insulting and condescending. At least one or the other. You can't change. You can't do it. You're not capable. It's beyond your ability or capacity. The only way you could ever change is if a lot of other people come together and act on your behalf by changing "the environment" so that you stand a chance. Isn't it better to be honest and say, "You know I understand exactly how difficult and tough it is. BUT. You can do it. It may be hard. It may mean always choosing the more difficult path before you. But you know what, you can do it. Some days will be easier than others. There will be moments of doubt and despair. But it is doable. You'll have to change how you think, how you react, how you cope. You'll have to rewire your brain and change your lifestyle. But it isn't as impossible as it sounds."

The second half of her argument is that the environment must be changed on behalf of the overweight/obese in society. The environment should be changed through both regulations (I'm assuming legislation?) and voluntary submission to new health guidelines. She's talking about making-over a country so that workplaces, restaurants, supermarkets, and stores of all sorts will no longer prove "a threat" to the nation's health.

Let's look at some of her ideas for restaurants. Standardized/regulated portion sizes across the nation. Most entrees--if not all--should be 700 calories or less. So that no one "accidentally" eats more than a third of their daily calories. Require 10% of a restaurant's menu to be healthy, following current government approved nutrition tips. Train waiters on health and nutrition, so they can warn customers about the risks and dangers of ordering certain things off the menu.

Let's look at some of her ideas for supermarkets. Smaller supermarkets, for one. Fewer choices overall, perhaps. All unhealthy food will be available, but, put in places where you really have to search it out to find it. Stores arranged by meal: a breakfast area, a lunch area, a supper area. If "fruits and vegetables" end up being in two or three places, all the better, in her opinion. Stores should have cooking demonstrations, lots of free samples, give out recipe books, and teach about meal planning.

Essentially, her idea is that if you happen to change the environment so that it is easier to eat healthy and more difficult to eat unhealthy, then health will probably most likely improve because people will always do what is easiest and takes the least amount of thought. Though she admits that she has no idea if changing the environment would actually work and solve the nation's obesity crisis because no one has attempted it yet, not even in a few small, "trial" areas.

Do I agree with the second half of her argument? That's a tough one. Do I think it's a good idea for waiters to start lecturing customers on what they're ordering and telling them that they shouldn't eat that because it will make them fatter?! Of course, that's an exaggeration. Cohen is not arguing for rude behavior. But still.

I do think this half of the argument isn't quite as flawed. I do wish that every restaurant had actually healthy options. Not pretend-healthy options that are slightly healthier by comparison. I do wish that restaurants were perfectly straightforward about what is in each dish and how it's prepared. I do think it's a good idea to portion things better. For example, instead of over-portioning you on carb-heavy items like rice and pasta, they'd give you exactly a serving size: half a cup. Of course, carbs aren't the only things that need to be portioned. (For example, I know a restaurant where the chicken-fried steak meal is TWO battered-and-fried steaks topped with gravy. Two is *the* portion. You have to ask for the "child's plate" or the "senior" plate to receive just ONE steak.) I would REALLY, REALLY love to see vegetable options in restaurants that aren't fried, creamed, covered in gravy, or buttered-to-death. And I would really, really, really love to see fresh fruit as an option in restaurants. I agree with her that I think it is really difficult to stay out of restaurants all together. She mentions work-related and family-related gatherings at restaurants, and, it can be tough to find that "one" healthy option at a restaurant that is doable some of the time.

As for grocery stores, they are in the promoting-and-selling business. And I'm not sure that "free samples" of vegetables are going to sell more vegetables. Though I do believe that vegetables *can* be prepared in yummy, yummy ways. I eat a LOT of vegetables myself. I don't think it's a lost cause, and, that vegetables and fruits should be neglected so scientists can work on futuristic foods that are "healthy and taste good too." (Can you tell I'm still annoyed by reading Stuffed: An Insider's Look at Who's (Really) Making America Fat?!)

One thing that she doesn't really mention needing to change is television. She does mention the Food Network, saying that if grocery stores offered cooking demonstrations and cooking classes then people would benefit after all they love to watch the Food Network. The Food Network is not in the business of creating/teaching healthy recipes designed to help people watch what they eat, to lose weight, to prevent chronic diseases. You hardly ever--if at all--see them caution you against using too much salt, too much cream, too much butter, too much sugar, too much white flour, etc.

Some ideas seemed potentially good--ideal. But I'm not sure all of them are. And even the good ideas seem like it would be an uphill battle to achieve implementation. Not that that reason alone is worth giving the matter all up. But it is asking us to potentially place a lot of trust and power/authority into the government.

Am I convinced that all of society needs to be rebuilt/redesigned with the overweight/obese victim in mind? I found it an engaging read. But it read more like a dystopia to me.

I would rather be told that I can take baby steps right here, right now. The other alternative is kind of depressing!