My Thoughts on Lark Rise to Candleford Series 2 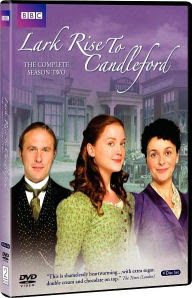 Here is my review of season one. To recap: So. The show centers around the post office of Candleford essentially. The heroines are Laura Timmins, a new, oh-so-young apprentice, and the older-and-mostly-wiser postmistress Dorcas Lane. Laura comes from the (rural) community of Lark Rise, and she finds quite a bit of difference between the two communities or villages--between those living (and working) in Lark Rise to those in Candleford.

Season two introduces new characters to the show. (In no particular order....)
The season has two weddings...though neither of the 'main heroines' is the bride.

The season begins with a Christmas episode that would be nearly perfect if it wasn't so ghostly. On the one hand, there are some very quotable lines in this one. Scenes that are just right. On the other hand, all the ghost business is just weird and unsettling.


Pearl: Ruby, you are beyond felicity.
Ruby: Pearl, you speak like a baboon who swallowed a dictionary.

Episodes two and three focus on two newcomers: James Dowland and Minnie Mude. James Dowland never really captured my interest, though Dorcas may have developed feelings for him, I never shared them. But Minnie, well, Minnie she's a favorite.

Episode four focuses on the romance of Thomas Brown and "Miss Ellison." Her father dies, and, he decides the time has come to propose marriage. Unfortunately, the arrival of an estranged brother, confuses Miss Ellison so much she's oblivious to nearly everything else including Thomas.

Episode five, six, and seven: These episodes focus in on Laura and Fisher Bloom. We also learn more about Minnie. Some time is also spent focusing in on Robert and Emma, Laura's parents.

Episode eight: James Dowland finally declares his feelings for Dorcas--undeniably. Unfortunately, a business partner and former/current lover arrive in town and lets Dorcas know in plenty of detail that James is not as 'free' as he proclaims.

Episode nine: The focus is on Lark Rise, mainly, as Alf falls in love with a girl from a neighboring village. Also Thomas and Miss Ellison struggle to agree on when to get married! He wants to wait and save up money. She wants to be married in October!

Episode ten: This episode is just weird and surprising! Constable Patterson--a married man--falls for Pearl Pratt when he sees her kill a mouse. He attempts to woo her with vegetables from his garden...and somehow...it works?! This "romance" is short-lived when the wife finds out...but still....

Episode eleven-and-twelve: These episodes are good. Dorcas discovers that James Dowland has a son, a son that he never knew about. He is all for keeping his son at boarding school and never meeting him. She'll have none of that. She creatively finds out more about the school Sydney is at and convinces him to do something for his son: bring him home now. She does end up taking care of Sydney full-time, but, this is a good thing. The wedding day has been set for Thomas and Margaret...but will things go smoothly?! These episodes have some funny and charming moments.

I loved the romance between Thomas and Miss Ellison. I thought she softened his character a little. I was not a fan of James Dowland though it was good to see Dorcas get over Timothy.

Minnie became a favorite character of mine as well though I would find her exasperating too. I was delighted to see the actress in Poldark.