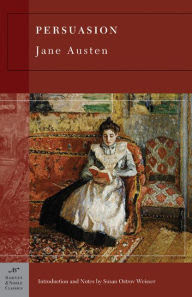 Persuasion by Jane Austen is without a doubt one of my favorite books. Persuasion, Jane Eyre, and North and South are my top three classics, top three romances. As to which of the three I like best, well, do I really have to choose between them?! I've read these three again and again and again and again. I do feel sorry for people who don't make rereading a priority in their lives!

Anne Elliot is the heroine of Persuasion. She has a father, who in turns neglects and insults her, and two sisters. Her oldest sister, when she thinks of her at all, does so in a condescending manner. Her younger sister, well, she thinks of her more often, but mainly in a way that takes advantage of her! Anne is both patient and frustrated. She's made peace with how things are, accepts that this is how things will likely remain. True, she sometimes finds herself dreaming of HIM. The man she loved passionately way back when, and, still loves to this day. The man that her family disapproved of. The man that she ultimately broke up with because she was a dutiful daughter. Captain Wentworth. Yes, sometimes she does think of him....

So when the family's financial difficulties leads the family to move to Bath and rent out their estate to a naval officer, that, is when Anne gets a second chance at life, love, and happiness. Of course, no one knew it would be to her advantage! Anne meets Captain Wentworth again. The meeting isn't without its awkwardness. And Captain Wentworth seems EAGER to marry now that he's established himself and is quite wealthy. But he's eager to marry any woman that is not Anne....

There are dozens of characters to meet in this one. Austen, like always, does a great job in creating a world we carry about, and characters we can react to! This is Captain Wentworth and Anne's story....but.... it's much more than that.

I haven't read this one yet. It is terrible how long it takes me to get around to classics.

Persuasion is one of my favorites, too. I loved walking on the gravel path in Bath where Anne and Captain Wentworth walked: http://www.joyweesemoll.com/2014/10/17/england-photos-day-2-bath-brifri/