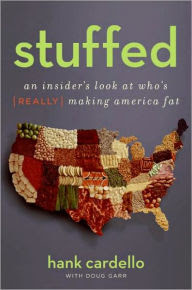 I was curious to read Hank Cardello's Stuffed: An Insider's Look At Who's (Really) Making America Fat. It is an interesting, somewhat informative, book.

The first five chapters focus on the 'who' is making America fat. It is part history lesson (like chapter one and the invention of frozen dinners) and part behind-the-scenes commentary (like learning how advertising and marketing works, and why grocery stores place things where they are). It covers "the food industry." Think grocery stores, restaurants, and even school cafeterias.

The next three chapters, in my opinion, focus more on the government--national and state--and various lobbies and special interest groups. He has strong opinions on how people are reacting to the obesity crisis. And he doesn't agree necessarily with how some people want to "fix" the problem.

The remaining chapters focus on clearly identifying the problem and brainstorming on how to do something about it. If I understand his position correctly, and that is something that I hope I'm being fair about, it is that he doesn't support "banning" or "forbidding" any ingredient or type of food through legislature. Instead, he is all about urging food companies (manufacturers), grocery stores, restaurants, schools and school cafeterias to voluntarily act on their own to do something about the obesity crisis.


As long as the government controls which foods are farmed, there is little reason to expect any improvement in the overall nutritional value of the nation's food supply. Fats and sweeteners are in. Fruits and vegetables are still out. (97)

The conventional wisdom among the food industry, activists, and government is that we consumers should act in a rational, disciplined manner. If something's bad for me, I'm obliged to say no. If it's good for me, then it's okay. But life doesn't work this way, as witnessed by our increased belt sizes. (141)

I think his focus was more on fixing things for "large groups of people" and not on individuals.

I would say his ideas or suggestions for how to "fix" things were on the modest side. For example, keep all the vending machines in schools, etc. Just stock them with snacks that are 100 calories or less. Just stock them with diet drinks or sugared-sodas in an 8 oz. size. One of his suggestions, and, I'm really doubtful that this would ever happen, was that fast food restaurants should refuse to sell food to kids and teens between certain hours of the day. Another idea that seems more on the ridiculous side to me, was, teacher-controlled cupcakes as 'rewards' for academic achievement.

I was disappointed, in a way, that he thought artificial sweeteners were the solution to most things. Make all snacks 'healthier' by artificially sweetening them. Lower calories equals automatic healthy snack! I disagree with that. I think artificial sweeteners--perhaps with the exception of stevia--are to be avoided if you really, truly care about what you're putting in your body and how it will effect you. Just my opinion.

He also seemed to think that the solution to 'unhealthy' restaurant food was to add omega-3 to (almost) everything. Just add omega-3 to Big-Macs and Big Macs will be healthy. (I'm not exaggerating. I'm really not.)

Yet another disappointment, to me, was that he didn't seem to think the way forward was to focus on real food, whole food, actual grown-from-the-earth food like fruits and vegetables. His focus was on future engineered food--junk food that is suddenly because of science actually healthy for you. I don't think the answer to America's health crisis is *more* engineering of our food. I think there are companies, perhaps with the best intentions in the world, "playing God" with our food supply, and in the name of "making it better" or "making it more affordable" or "making it tastier" is doing who-knows-what to the nations' future health. I think it needs to be said: we don't have all the answers, we don't know exactly what we're doing, we're trying and experimenting, but there are still so much we don't know yet.

But to close with something I can wholeheartedly agree with:


"The Food Pyramid saga gives us a good look at what happens when the government tries to do more than it is capable of." (94)

Very interesting. I'll have to look at this, having just read "The Dorito Effect". Our school vending machine doesn't work between the hours of 7 and 3, which seems silly. I must say that I NEVER give candy or other food as a reward of any kind, and it makes me flinch a little when other teachers do! I'm trying to change to agave syrup for my tea after 40 years of various sweeteners. Thanks for sharing this one!