My Thoughts on Young Victoria 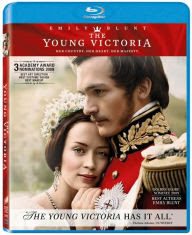 I love it from start to finish. There is plenty of tension and drama and ROMANCE. Is any of it embellished? Perhaps. Probably. Maybe. But I think there is plenty of reality to keep this romance grounded.

Do I love the soundtrack? No, I love, love, LOVE the soundtrack. I may have even listened to the soundtrack more than I've rewatched the movie. Simply because it's great for having on in the background while I write reviews! Favorite song: Marriage Proposal

Do I love the costumes? Yes.

Do I love the story and the characters? Yes. This one is giddy-making and magical.

Is it clean--in terms of content? Relatively-mostly clean. Not "G" by any means. But the sensuality is relatively mild in terms of movie-making, and, it all occurs after marriage. For those who insist on squeaky clean, it's nothing that can't be fast-forwarded through painlessly. I'd say for those used to watching PG movies, this one wouldn't be anything objectionable.


Some people are born more fortunate than others. Such was the case with me. But as a child I was convinced of quite the opposite. What little girl does not dream of growing up as a princess? But some palaces are not at all what you would think. Even a palace can be a prison. Mama never explained why she would have someone taste my food, why I couldn't attend school with other children or read popular books. When my father died, Mama and her advisor, Sir John Conroy, created rules. He said they were for my protection, and he called it The Kensington System. I could not sleep in a room without Mama, or even walk downstairs without holding the hand of an adult. I learned the reason for all this when I was eleven: my Uncle William was the King of England, yet he and his three brothers could boast only one living child. And that was me. Sir John's dream was that the King would die and there would be a regency where my mother would rule England and he would rule my mother. So I began to dream of the day when my life would change and I might be free. And I prayed for the strength to meet my destiny.

Soon after this first meeting of cousins:

I enjoyed this one, too! I was absolutely fascinated by the Kensington System -- I ended up doing some research on it after watching the film.