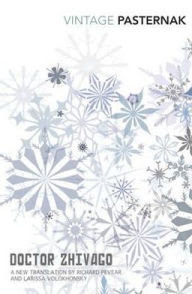 Doctor Zhivago is one of those books that I've "been meaning to read" for years now. Once I decided to actually read it, it took me just five days. "Actually" is a great little word, I've found.

So is the book like the movie? Or. Is the movie like the book? The book is a lot more complex than the movie, in my opinion. The movie seems to make everything about Dr. Zhivago and Lara, and the depths of their oh-so-amazing love. That is not the case in the book. (That's not to say that Lara isn't one of the major characters in the book, but, the book doesn't revolve around her.)

So essentially, the novel covers a little over three decades of Russian history. And those three decades are turbulent, bloody, terrifying, cruel. Probably three-quarters of the novel is set between the years 1910-1920.

If you come to the novel expecting a ROMANCE, then, chances are you'll be bored. It is "about" so much more than how a man feels about a woman.

The main character is Doctor Zhivago (Yurii Andreievich Zhivago; aka Yura). Readers are first introduced to him at his mother's funeral. They learn that his father abandoned him and his mother. He'll be looked after by an uncle (Uncle Kolia). (This definitely varies from the movie.) As a teen, he and a friend (Misha Gordon) live with the Gromekos family. Yura later marries into this family, marries Tonia Gromeko. The start of World War I in 1914 disrupts his happy home.

Lara (Larisa Feodorovna Guishar) is another main character. While in the movie she is without a doubt the one and only love of Dr. Zhivago's life, in the book she plays a subtler role perhaps. Readers do spend some time with her through the decades. But then again readers spend a good amount of time with Tonia as well.

There is a third woman in Dr. Zhivago's life. A woman that the movie fails to portray at all. His "third wife" Marina (Marinka). He spends the most time (day-to-day, routine) with this 'third' family. They have two children together, and, he's there for the raising of them for the most part.

Some of his friendships are stabler than his love life. Though to be honest, this isn't completely his fault! Like when he's compelled (kidnapped) into the army during the Revolution. He was forcibly separated from his family, from returning to his family. (Part of me does wonder, if he hadn't been on the road--returning from the town to his country farm, returning from seeing Lara-- would he have been kidnapped? Would they have sought him anywhere he happened to be, since they knew there was a doctor in the region?) After he escapes, and the escape isn't quick in happening, he learns that his family has been deported to France. He's not exactly able to join them, and, yet, one wonders once again...IF he could join them, if he was granted permission from the country and allowed to leave Russia, and if he had the money to do so...would he? Or would he choose to remain in Russia and start a new life with Lara.

The story and the drama are certainly complex enough. At times I felt the characters were complex as well. At other times, I thought they were a bit flat and idealistic. I never really felt like I could "understand" the characters--understand their thought processes, motivations, and such.

I'm not sure I "liked" any of the characters in the traditional sense. But at the same time, I felt the story compelling enough. Especially if you go into it not expecting a romance. Plenty of tragedy, I suppose, if you want to look at it like that.

I don't think Dr. Zhivago's life turned out like he planned or hoped or dreamed. His life was interrupted and disrupted by outside forces, perhaps. In some ways, Doctor Zhivago reminded me of Gone With The Wind.

I've neither read it nor seen the movie. As you said, it's one I keep thinking I need to check out some time, so I appreciated your review giving me a bit more about it.