I saw this at The Written World--a blog I've been following for most of the time I've been blogging--and I thought I'd join in the fun. I believe the most recent recurrence of this is from Jenni Elyse's blog.

Today's prompt: A book you thought you wouldn’t like but ended up loving 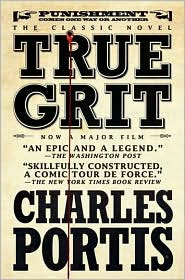 People do not give it credence that a fourteen-year-old girl could leave home and go off in the wintertime to avenge her father's blood but it did not seem so strange then, although I will say it did not happen every day.

Last week I reviewed The Virginian by Owen Wister, this week I'm reviewing True Grit. Could it be that I'm not as allergic to westerns as I thought? Or have I just found two exceptions to the rule?!

What's the word that best describes our heroine, Mattie Ross? Spunky? Stubborn? Strong-willed? No-nonsense? Independent? She's all those things, it's true, but it goes deeper than that perhaps. She does not back down. If Mattie has made up her mind, then there's no changing it. There's no arguing with her...and winning. It just can't be done. She may be a kid--a girl--but she can hold her own in a world of men.

When her father is murdered by Tom Chaney, a man her father had half-way trusted--at least trusted enough to give him a job, a place to live, and a "second" chance at life--then Mattie Ross decides then and there that he will pay for his crime. She'll see that justice is done, even if she has to pay for that justice herself.

Mattie hires a marshal with grit--Rooster Cogburn. The Fort Smith sheriff tells Mattie that Rooster Cogburn "is a pitiless man, double-tough, and fear don't enter into his thinking. He loves to pull a cork" (23). She promises a $100 for a job well done. But she doesn't tell him--at least not at first--that she has every intention in the world of going with him on his search. Yes, this fourteen-year-old girl is going to ride side by side with him on his dangerous mission--hunting outlaws is always dangerous, you know. And then there is the third companion, a Texas Ranger, LaBoeuf. He wants to find Chaney/Chelmsford too. There's money to be find in bringing him to justice. While LaBoeuf's motivation is more monetary, perhaps, for Mattie this is purely personal.

And it was the fact that this was a personal story--though don't expect it to be sentimental or weepy, Mattie is no Elsie Dinsmore--that touched me the most. It is my connection with Mattie that made me love this one. Her character, her personality, her strength as a narrator. I think Mattie is unforgettable.

While I can't say that I loved every scene in this one--especially the one with the poisonous snakes--I have to admit that I did enjoy this one very much. I found it very compelling!
© 2016 Becky Laney of Becky's Book Reviews
Posted by Becky at 11:30 AM

I typically avoid westerns, too, but I am sure there are exceptions!